Large crowd turns out in Dublin for #IBelieveHer rally 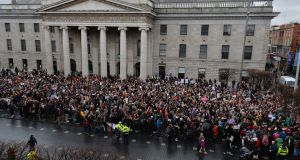 At least a thousand people brought traffic and trams to a standstill on O’Connell Street in Dublin on Thursday afternoon in a rally in solidarity with the woman in the Belfast rape trial that concluded yesterday.

Ireland and Ulster Rugby players Paddy Jackson and Stuart Olding were acquitted of raping a then 19-year-old Belfast student after a trial that lasted eight weeks.

Their friend Blane McIlroy was acquitted of exposing himself to the woman and Rory Harrison was found not guilty of two counts of attempting to cover for his friends after the alleged events by misleading police and withholding information.

Many marchers held handwritten placards bearing signs with #IBelieveHer and the #MeToo phrase that has gained global reach following marches in the US by people standing in support of all survivors of sexual assault and harassment.

A young woman held up a handwritten sign with the words: “Rape is caused by” and the words” tight clothes, drunk girls, flirting” crossed out and the word “rapists” printed boldly below.

I think there’s lots of aspects of our legal system, particularly family law, where there is bias against women and I think it’s important to highlight that

Loud chants of “I stand with her!” filled the air as the gathering grew quickly and spilled over from the area around the Spire into the northbound lane of the street outside the GPO.

Solidarity TDs Ruth Coppinger and Bríd Smith addressed the huge crowd, with Ms Coppinger calling for better sex education in schools and an end to the “macho, sexist culture” she said was displayed in text messages between the accused following the party on the night of the events that led to the trial.

She told the crowd that when it came to sexual assault, “silence is not consent”.

Ms Smith criticised a legal system that she said “puts women on trial, not the rapists”.

Ailish from Dublin told The Irish Times she and her four friends came into town “to show this girl just how proud we are of her and how courageous she is”.

“She has unbelievable strength for going through what she went through.

Yesterday we were all shaken and I was so upset. I just thought how alone she must feel. But everybody is here today to show her how strong she is.

“It’s just so important for us all to be here and to be having this conversation.”

A woman who did not wish to give her name became tearful and said she believed the trial would discourage people from coming forward with allegations of sexual assault.

“It’s actually very upsetting that this girl has had to be put through this. This country doesn’t give a shit about people,” she said.

“The media and everything, they floored her.”

Richard Duggan from Phibsborough said he came to the rally because he believed the trial in Belfast was “symptomatic of large-scale misogyny in Irish society”.

The event grew to such an extent that gardaí had to stop traffic from coming up the northbound side of O’Connell Street. A Luas tram remained stationary at the nearby stop, with the driver waiting in the cab for over an hour because it could not proceed.

A campaigner from Rosa, a campaign group on reproductive rights and anti-austerity issues and affiliated with the Socialist Party, told the gathering that this would be the start of a movement that would tackle sexism and inequality in daily life.

Similar rallies took place in Belfast, Galway, Limerick and Cork on Thursday in support of the young woman, who was in the witness box for eight days during the course of the trial.

Outside the GPO, meanwhile, a young woman’s cardboard sign read: “Tears of anger, but not defeat.”