Leaving Cert 2021: No deadline for a decision, Minister says

‘We are not setting artificial timelines... most important thing is that we get agreement’ 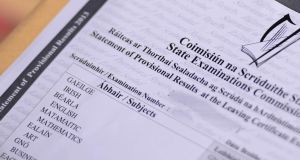 Government and union sources say March 1st is being examined as a potential date for reopening primary schools on a phased basis, subject to public-health advice. Photograph: Bryan O’Brien

There is no deadline for a decision being made on this year’s Leaving Cert, Minister for Housing Darragh O’Brien said on Sunday.

He said the Government was “not setting any timeline” for reaching an agreement on the exams.

His comments appear to contradict a statement from Taoiseach Micheál Martin who said last week there would be clarity this week on what form this year’s Leaving Certificate would take.

On Saturday the ASTI said it would re-join discussions involving the Department of Education and teachers’ unions.

It had been expected that Cabinet would agree on a plan this Tuesday to give students an option of calculated grades or a written exam.

“We are not setting any artificial timelines on this. The most important thing for the students and their families is that we get agreement with their partners in education and the unions on a way forward,” Mr O’Brien said.

“I am very pleased that ASTI are back in on those talks. They are happening right the way through the weekend. We are confident that we will be able to provide that certainty for people but I think setting a timeframe of Tuesday may not be helpful,” Mr O’Brien said.

“If it happens by then, absolutely fine, but the priority for us is those students, many of which missed a lot of school. We want to give that certainty, and we will, but we can only do that with the agreement of our partners,” he said.

Mr O’Brien said he is confident that an agreement can be reached “in the short term”, he told RTÉ’s The Week in Politics. “Sometimes it is not helpful to set an artificial timeline.”

His Cabinet colleague Minister for Health Stephen Donnelly said on Sunday there was “no fixed date” for the reopening of schools.

“We don’t have that yet. I know Minister (Norma) Foley is involved in intensive talks and confidential talks with the stakeholders.

“Obviously we need to get the Leaving Cert students back as quickly as possible, but my understanding is that there are no fixed dates as of yet.”

Government and union sources say March 1st is being examined as a potential date for reopening primary schools on a phased basis, subject to public-health advice.

At second level, the ambition is for a phased return from late February or early March, beginning with sixth-year students.

The ASTI pulled out of the talks because it said it was unhappy that the calculated grades system was being prioritised over coursework, orals and practical exams.

Following a “constructive” meeting with Minister for Education Norma Foley on Friday, the union announced on Saturday morning that it would re-join the discussions.

The decision was welcomed by Ms Foley. An ASTI statement said: “The Minister was unequivocal in her statement of commitment to holding the Leaving Certificate this year.

“On that basis, the ASTI believes that doubts regarding the staging of additional component elements of this year’s Leaving Certificate examinations have been substantially alleviated. We expect the minister to ensure that they will take place.”

It said it had received assurances from Ms Foley that the lack of data to inform the calculated grades system will be addressed and that teachers will not be required to rank students in order of merit, as they did in 2020.

“We will continue to constructively engage to seek to ensure ways are found to facilitate this year’s Leaving Certificate students in moving on with their lives,” the union said. A spokesperson for Ms Foley welcomed the ASTI’s return and noted their “willingness to engage on the agenda that has already been set out in the process”.

They added: “Intensive engagement is continuing with the education stakeholders to advance progress and provide certainty and clarity at the earliest possible time.”

However, the withdrawal from the talks by the ASTI has delayed the process of providing clarity on the exams for tens of thousands of students.

The ASTI withdrawal was criticised by Ministers. On Friday, the Minister for Further Education described as “beyond unhelpful” the union’s decision to walk away from the negotiations.