A young fox that has been noticed on the streets of Dublin in recent times has now been filmed with another fox in the grounds of Trinity College Dublin. Video: Eoin Hand TCD Press Office 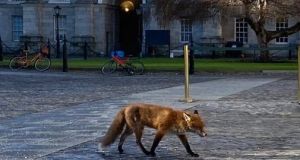 Sam the Trinity fox seen in the grounds of the university. Staff left out food laced with antibiotics after she was seen with mange during the first lockdown. Photograph: Eoin Hand.

Sam, the fox living on the grounds of Trinity college in Dublin, and who was seen wandering the streets of Dublin during the first lockdown, is pregnant.

Staff at the university became concerned for the vixen’s health last year when she developed mange on her tail and appeared emaciated.

With all restaurants and bars closed and the city centre virtually deserted during the first lockdown, Sam was deprived of scraps. In response, staff at Trinity College Dublin left out meat infused with an antibiotic and her health has since improved significantly.

The latest development involving Sam happened last month, when she was in heat.

She attracted two suitors, who have been named Prince and Scar by college staff, who fought for her attention. Scar, a fox from Ringsend, is so called because of a gash above his eye.

Sam appeared more attracted to Prince though and, since then, video and photographs of the pair wandering around the Trinity grounds has been taken by the TCD students union’ president Eoin Hand in recent weeks.

“When the females are in heat, the males and the females go a bit crazy,” said TCD zoologist Collie Ennis.

“They don’t seem to care. They were literally out in the middle of the green mating all over the place.

“We have pretty graphic video footage. We definitely know ‘who’s the daddy’, put it that way.

“It has kept us entertained in the college for the last couple of months.”

The gestation period for a fox is short - just 48 to 52 days - so it is expected Sam will give birth to cubs next month.

There have been various sightings of Sam the fox across central Dublin in the last year. In May she was pictured by a photographer in Temple Bar with a dead bird in her month.

She is also the chief suspect for an incident in September 2019 when a fox broke into the Department of the Taoiseach and urinated in a room.

Pest controllers found a “strong smell of fox urine” in the department during a callout in response to the finding of a dead rat under a raised floor in the building in September.