Cheap and quick: Could rapid antigen testing be the way out of lockdown?

Some are still sceptical of the DIY test, but Liverpool rollout shows encouraging results 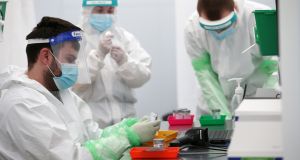 Lab technicians process antigen tests at the RocDoc facility at Dublin Airport which has been established for hauliers bound for France via Dublin Port. Photograph: Laura Hutton

If there is one thing that people with differing views on Covid-19 lockdowns agree on, it is the importance of effective, rapid testing to identify infections.

Increasingly, this is not just about the number of tests you can do, but also the type of tests involved.

Up to now, all three million or so tests carried out on Irish people have used a technology known as polymerase chain reaction (PCR). This is generally described as “exquisitely sensitive” and the “gold standard” of testing for the virus. But it is also slow, expensive and, like all tests, imperfect. There is a risk of false negatives where a person is pre-infectious, and also of misleading positive results in people who are post-infectious and no longer a danger to anyone.

For most of the pandemic, there have been alternatives to PCR which are cheaper and quicker, but which have failed to pass muster on accuracy grounds.

That situation is changing now, with the increasing use of rapid antigen testing internationally in a variety of settings, and its limited acceptance for the first time by Irish authorities.

In an ideal world, you could test yourself every morning, and head off to school or work on the back of a negative result


Unlike PCR, which looks for the RNA of the virus, these tests look for specific proteins made by Covid-19. The test, which takes 15-30 minutes to produce a result, involves swabbing the nose or throat, dipping the swab into a vial of viral medium and putting some drops from this on to a testing strip. It sounds like a pregnancy test.

Since last month, the Health Service Executive has started counting a positive antigen result as an infection in official data; previously, this had to come from a PCR test. Antigen testing has been approved for use in settings such as hospitals, where there are outbreaks and high numbers of symptomatic patients.

Supporters of antigen testing want to see the technology used more widely. The way out of lockdown, they suggest, is in part through mass antigen testing, so infections can be quickly detected.

In an ideal world, you could test yourself every morning, and head off to school or work, or even a concert, on the back of a negative result.

However, antigen tests only deliver a positive result when a person is most infectious, for up to eight days in the infection cycle. Some tests might come up negative, but the person would still be infectious.

“It was concerning to see the number of negative antigen tests that were positive on PCR in some of our outbreak settings,” one HSE public health doctor told The Irish Times. “If you are investigating an outbreak in a nursing home, say, you don’t want any positive case to slip through the net.”

“It is important to note that rapid antigen tests may be sensitive enough to detect cases with a high viral load, which likely account for a significant proportion of transmissions,” according to a report published in December.

Harvard epidemiologist Prof Michael Mina is an outspoken critic of the reliance of Ireland and other countries on PCR testing. Rather than focusing on how well molecules are detected in individual samples – which PCR does excellently – we should be looking at how repeat testing can detect infections in overall populations, he says.

The tests we need are “fundamentally different” from the ones being used. Instead of tests designed for one-off clinical diagnoses, he argues, we need inexpensive, easy-to-execute tests that, by allowing for frequent repetition, can limit the spread of infection in a community.

In Liverpool, over 500,000 people have been tested in a pilot project using the Innova antigen kit, which had been purchased in bulk by the UK government.

The results have been highly encouraging, according to Prof Louise Kenny, formerly a Cork-based obstetrician who is now pro vice-chancellor of Liverpool University.

An evaluation by the university found that antigen testing succeeded in identifying 84-91 per cent of infections, and has contributed to lower rates of transmission of the disease in Liverpool compared to other parts of northern England.

“Lateral flow [antigen] testing does what it says on the tin; it’s cheap and robust and it picks up most infection,” she says. The issue with false negatives “is not as big as previously advertised”, and diminishes further with repeat testing.

There is no evidence of false reassurance from a negative test result leading to an increase in infections, she adds.

One convert is Trinity College Dublin scientist Prof Luke O’Neill, who says there is more and more evidence that antigen testing is “a fantastic thing to do”.

“It’s cheap, it’s point-of-care – so you can do it yourself – and it predicts if you’re infectious,” he says.

Whereas with PCR a person can test positive and not be infectious, antigen testing “really correlates with infectiousness”.

The Liverpool experiment provoked a furious row on social media, with some British scientists claiming the initial results showed up to a third of cases with high viral loads had been missed.

Prof Kenny says her university’s initial assessment was cautious and probably underestimated the efficiency of the tests in identifying infections. The most infectious people are those with the highest viral loads, she points out. Tests are repeated, usually every five days.

Further analysis has demonstrated the positive outcomes in Liverpool but the dispute between UK scientists has reinforced the caution of other experts, including those in Ireland.

“Much of the commentary I’ve seen on antigen testing suggests it’s either a panacea that will end the pandemic, or it simply doesn’t work at all,” assistant chief medical officer Dr Ronan Glynn said this week.

“It’s likely there are pros and cons, and some situations where it can be applied. But we have to be guided by the evidence.”

Yet antigen testing is freely available here, in the private sector. Thousands of hauliers take the test each week in Wexford prior to travelling to France. The country’s biggest egg producer, Greenfield Foods, says it would have had to close but for antigen testing helping to eliminate outbreaks in its facility in Co Monaghan.

In contrast, the health service is using antigen testing in a limited way, alongside PCR testing. An independent expert group has been set up to see if it can be used more widely in schools and workplaces.

With case numbers dropping, Ireland now faces the same challenge of keeping the virus suppressed as it did after two previous waves. We failed to achieve this on either occasion, in part because our testing and tracing system was not up to the task.

The HSE has evaluated six different antigen tests, of which one achieved the target of identifying at least four out of every five infections among people showing symptoms. However, performance for asymptomatic people fell below this requirement of 80 per cent sensitivity, chief medical officer Dr Tony Holohan told a National Public Health Emergency Team meeting last month.

Dr Holohan claimed antigen testing could slow down the testing process because it is not designed to be carried out en masse. Many hospitals can already turn around PCR tests within four hours, he pointed out.

The continuing scepticism of public health officials is clear; the problem is that it leaves us with few options to suppress the virus other than the lockdowns we have become all too familiar with.