Last call: Latest Irish phonebook could be the final edition 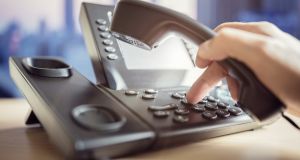 The number might be up for the State’s printed telephone directories. File photograph: Getty Images

The number might be up for the State’s printed telephone directories, as the current 2019/2020 phonebook could be the final edition ever.

ComReg, the telecom regulator, has signalled it favours removing the requirement on Eir to make a printed version of the directory available for landline subscribers in future.

Fewer than 2,400 copies of the latest phonebook have been ordered by members of the public since last year’s decision by the regulator that a free printed local-area directory would no longer be provided to every subscriber.

ComReg has revealed that Eir received just 2,399 requests for the phonebook this year, which ultimately resulted in 2,354 copies being provided.

The vast majority of people who requested a directory collected it free of charge from an Eir store of their choice, with only 298 paying the €4.70 charge to have it delivered to their home.

Eir has calculated that it cost €39.02 to print each copy.

While Eir was permitted to charge a distribution fee for delivery of the directory, ComReg ruled that it could not impose charges on subscribers for the cost of printing and packaging the phonebooks.

ComReg said it regarded the number of requests for the directory as “very low”.

Consumers were notified earlier this year that the 2019/2020 edition of the phonebook would only be delivered if they specifically requested a copy.

Eir had sought to change policy on the basis that the provision of a printed directory had become uneconomical due to falling advertising revenues and increased costs.

The company described the phonebook as “obsolete and unnecessary”.

Where once several million copies of directories were printed annually, ComReg said only 2,800 of the latest edition were printed, including 890 for the 01 Dublin area.

A survey of people who ordered a copy of the 2019/2020 directory revealed that the vast majority (83 per cent) were over 65 years of age, while 78 per cent had never used an online directory.

One-third did not have internet access in their home.

ComReg said the results showed that a significant portion of people who ordered a phonebook continued to use it primarily for reasons of convenience and habit.

It said there may also be a lack of awareness among such users about alternatives services such as free online directories and directory enquiry services.

ComReg has now launched a public consultation on whether it should cease requiring printed phonebooks to be made available.

The regulator said it believed that there was no longer a need to impose such an obligation on Eir as universal service provider.

“ComReg is of the preliminary view that there are now sufficient affordable and accessible alternatives for sourcing phone numbers that could serve all age profiles and areas in the State appropriately,” the regulator stated.

ComReg said the online directory had the advantage of being more accessible when people were “on the move”, as well as being free and updated more regularly than the printed phonebook version.

The regulator noted the demand for directory enquiry services is also declining, with Eir reporting that revenue from its operator services had fallen by 33 per cent to €5 million in the year to June 30th, 2019, as a result of reduced call volumes to its 11811 directory enquiries service.

It pointed out that a survey it commissioned last year showed that the internet was the most popular source for finding both personal and business phone numbers, at 56 per cent and 83 per cent respectively.

The survey also highlighted how 83 per cent of members of the public stated they would be unwilling to pay for a printed phone directory.