LÉ Samuel Beckett to return to the Mediterranean on Sunday 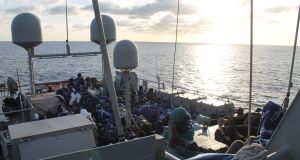 The LÉ Samuel Beckett with more than 500 migrants on board during its operations in the Mediterranean in 2016.

The LÉ Samuel Beckett is returning to the Mediterranean as part of the European Union’s efforts to disrupt people smuggling and also to rescue migrants at risk of drowning.

The ship, an offshore patrol vessel and one of the Naval Service’s eight ships, will set sail on Sunday to join Operation Sophia, or EUNAVFOR Med, the 27-nation strong mission operating mainly between Libya and Italy.

The navy has been involved in migrant rescue in the southern Mediterranean for several years through a bi-lateral agreement with Italy. It was only last year that the Government gave approval for full Defence Forces participation in EUNAVFOR.

Irish forces are now fully integrated into the command structure and have direct access to mission intelligence.

Last autumn, the LÉ Niamh was deployed from October to December. The Government has committed to participating in the operation at least until the end of November.

The Samuel Beckett will set sail from Cobh on Sunday under the command of Lieutenant Commander Eoin Smyth. Wishing him and the crew well, the defence minister, Paul Kehoe, said he was confident they would help make Operation Sophia a continued success.

“Ireland will once again be making a contribution to addressing some of the root causes of migration and human trafficking,” Mr Kehoe said in a statement.

“The main focus of the mission is security and interception operations, in order to disrupt the operations of criminal organisations engaged in human smuggling and trafficking operations, preying on vulnerable people and exacerbating the migrant crisis in the Mediterranean,” he said. “The LÉ Samuel Beckett will also be available to respond to requests from the relevant authorities to assist with humanitarian search and rescue when required.”

Mr Kehoe has just returned from Switzerland where he visited the Pilatus aircraft facility in Stans. Three fixed wing PC-12 aircraft are being built there for the Air Corps at a cost of €32 million.

The planes, which will be delivered and come into service between 2019 and 2020, are equipped for Intelligence, Surveillance, Target Acquisition and Reconnaissance (Istar) tasks, logistics support including troop and equipment transport, and medical evacuation/air ambulance work. They will replace five Cessna FR172H aircraft bought for the Air Corps in 1972.

On Friday, Mr Kehoe was in Kreuzlingen at the General Dynamics Europe Land Systems facility where the Army’s Piranha III Mowag armoured personnel carriers are built.

The 80-strong fleet is being upgraded at a cost of €55 million to increase the protection offered to troops and extend the life of the vehicles, bought between 2001 and 2007, to 2030.