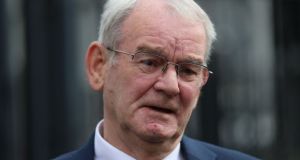 Alan Black survived the shooting even though he was shot 18 times in the Provisional IRA attack at Kingsmill in south Armagh. File photograph: Niall Carson/PA Wire

Alan Black, the sole survivor of the 1976 Kingsmill Massacre, is among more than 80 people from Northern Ireland who received awards in Queen Elizabeth’s New Year honours list.

Mr Black survived the shooting even though he was shot 18 times in the Provisional IRA attack at Kingsmill in south Armagh.

In the attack a busload of textile workers were flagged down at Kingsmill as they were returning from work. The one Catholic among them was singled out and told to run away.

The eleven other workers, all Protestants, were shot by an IRA gang reckoned to comprise at least eleven members.

While the massacre was admitted by an organisation calling itself the South Armagh Republican Action Force, the Historical Inquiries Team in 2011 found that the Provisional IRA carried out the “purely sectarian” and “calculated slaughter” of the men.

Mr Black was awarded an MBE for services to the community in south Armagh.

South Armagh Ulster Unionist representative, Councillor David Taylor said it was a “much-deserved award to Alan Black, who despite enduring and surviving one of the most horrific events of the entire Troubles, has shown nothing but dignity and humanity throughout his life”.

“I know his recognition in the New Year honours list will be well received by people locally and much further afield as both he and the Kingsmill families continue their battle for truth and justice, even after 45 long years,” he added.

Concert pianist Barry Douglas received a CBE (Commander of the Order of the British Empire) for services to music and to community relations in Northern Ireland.

Champion gymnast Rhys McClenaghan, who will compete for Ireland in the next Olympics in Tokyo, was honoured with a BEM (Medallist of the Order of the British Empire) for services to gymnastics.

Mr McClenaghan from Newtownards, Co Down, who has also competed for Northern Ireland is a Commonwealth and European pommel horse champion.

Lord Diljit Singh Rana, one of Northern Ireland’s leading hoteliers was awarded an OBE (Order of the British Empire) for services to the business and economy in Northern Ireland.

Amanda McNamee, principal of Lagan College integrated school in Belfast was awarded an MBE (Member of the Order of the British Empire) for services to education.

Jonathan McMillen, an executive officer at the North’s Department for Communities, who works with the Syrian refugee project in Northern Ireland received a BEM for services to refugees.

Karen McDowell, a member of the Northern Ireland Fire and Rescue Service was made an MBE for services to the North’s fire and rescue service and to the LGBTQ community.

Ms McDowell, a station commander from Dromore in Co Down, transgendered while working in the service and works to promote greater acceptance of transgendered people.

Fiona Chamberlain, the former Crown Solicitor for Northern Ireland, received a CB (Order of the Bath), for public service, as did Derek Baker, permanent secretary of the North’s Department of Education.

David Lindsay, Lord-Lieutenant of Co Down, was made a Commander of the Royal Victorian Order.