Ireland in Level 5: Third nationwide lockdown to last until at least the end of January

Taoiseach Micheál Martin has announced the return of Level 5 Covid-19 restrictions for "at least one month", warning that measures to combat the spread of coronavirus are likely to continue after January 31st. Video: AFP 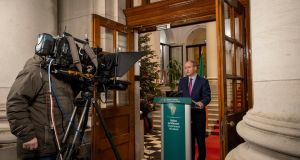 The country will on Thursday enter a third nationwide lockdown to last until at least the end of January following the rapid spread of coronavirus.

Schools will remain closed until January 11th in order to give families 10 days to minimise their social contacts.

All non-essential retail will close from Thursday night while social gatherings or visitors in the home are no longer permitted.

The public is being told to stay at home and not travel beyond a five-kilometre limit. Indoor and outdoor sports such as in gyms, as well as tennis and golf, will also not be permitted.

Speaking at Government Buildings following a special Cabinet meeting, Taoiseach Micheál Martin said the virus is “spreading at a rate that has surpassed the most pessimistic models available to us”.

It is understood that Tánaiste Leo Varadkar warned the Cabinet it is unlikely many of the restrictions will be lifted after the mooted end date of January 31st, while Ministers were also warned of the significant impact the move will have on the economy.

Mr Varadkar said on Wednesday night the decision to enter a stricter lockdown represented a “very hard blow for workers and employers alike”.

The pandemic unemployment payment will remain in place at current rates until the end of March at least, under a memo to be brought to Cabinet next week by the Minister for Social Protection Heather Humphreys. Some 40,000 additional workers will be laid off in the coming weeks in light of the tightened restrictions. Businesses forced to close from Thursday will be given a double payment for two weeks under the Covid Restrictions Support Scheme (CRSS).

The Taoiseach warned, however, that there will be a long-term “scarring effect” on the economy. 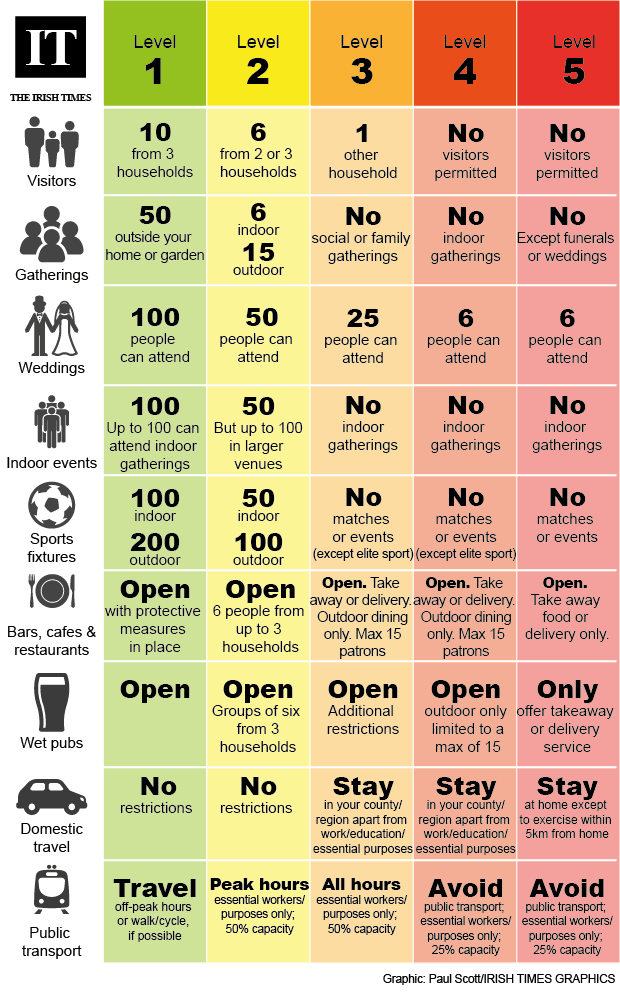 “The economic cost is significant. The concern we would have is around the impact on certain sectors and companies in terms of a long-term scarring effect, so we will continue to evaluate that.”

While Mr Martin said schools will reopen on January 11th, a Government statement said there would be a “further review on the precise situation in advance of that date”.

“Public health has been consistent in saying schools are safe places for children. In some cases this will be three extra days [off] in some schools or two extra days in others. By extending the break you are giving families an opportunity to put in place measures to ensure contacts are minimised and children can return safely to school.”

The Taoiseach said it is “fair to say quite a number of these restrictions will continue beyond the end of this month”.

Green Party leader Eamon Ryan said the ban on travel from Britain will be extended until January 6th while a separate ban on travel from South Africa has also been announced until the same date after a similar new strain of Covid-19 was found there.

For the second day in a row, a new record for additional cases of the virus was set, with 1,718 positive tests reported. Another 13 Covid-related deaths were also confirmed.

Public health officials responded to the worsening figures by telling people to “stay home” so transmission of the virus can be limited.

They also warned of up to 3,000 new cases a day and 1,200 patients in hospital by the end of January, even with partial reduction in transmission of the virus.

Chief medical officer Dr Tony Holohan said Ireland was once again in a mitigation phase, meaning resources should be focused on those who are sickest.

Continued exponential growth in cases will challenge the system and reduce the marginal benefit it provides, officials said.

Most indicators of the disease have sharply deteriorated in the past week, with a 41 per cent increase in testing and a 129 per cent rise in contact-tracing calls.

The number of Covid-19 patients in hospital increased to 455 on Wednesday, up from 411 the previous day. ICU numbers rose slightly to 37, up three.

The reproduction number, a measure of the extent to which the virus is transmitting, is currently estimated at 1.6-1.8, and case numbers are doubling every seven to 10 days.