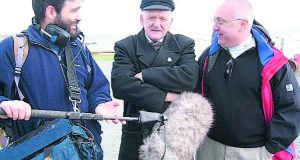 A file image of Patsy Dan Rodgers (centre), the King of Tory Island, speaking to a documentary team from BBC Radio Four.

The King of Donegal’s Tory Island, Patsy Dan Rodgers, has died after a long-term illness. He was 74.

Patsy Dan, or Patsaí Dan Mag Ruairdhrí, was born in Dublin’s inner city in 1944 but was adopted and brought to Tory island off the Co Donegal coast when he was four.

He quickly became part of the community on the island, which has a population of around 150 people.

A traditional musician who loved speaking Irish, Rodgers was an ambassador for the remote island and often met visitors as they arrived. He was also a painter who was celebrated for his primitive artwork with his last exhibition held in Donegal during the summer to mark his 50th year as an artist.

He became King of Toraigh in the 1990s when the family of the last king, Padraig Óg Rodgers, asked him to succeed their father.

He was a renowned musician, could often be seen playing the button accordion, and was awarded an honorary Master’s degree by the University of Ulster in 1997.

President Michael D Higgins paid tribute to Rodgers, who he described as an

“His love for Toraigh island and its people was evident in his art and his campaigns, and he was an outstanding ambassador for the island in all its welcoming diversity,” he said.