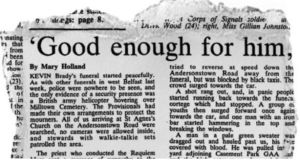 Mary Holland’s report on the front page of The Irish Times, March 21st 1988.

Kevin Brady’s funeral started peacefully. As with other funerals in west Belfast last week, police were nowhere to be seen, and the only evidence of a security presence was a British army helicopter hovering over Milltown Cemetery. The Provisionals had made their own arrangements to protect the mourners. All of us arriving at St Agnes’s Church on the Andersonstown Road were searched, no cameras were allowed inside, and stewards with walkie-talkie sets patrolled the area.

The priest who conducted the Requiem Mass sent a message of sympathy to the family of Gillian Johnston, the young Protestant woman, shot in Fermanagh on Friday night, and spoke of “a bewildered community’s desire for peace.”

The cortege left the church just before noon. Prominent members of Sinn Féin, including Gerry Adams and Danny Morrison, walked beside the family. The procession had gone about 200 yards when a silver car drove up the Andersonstown Road towards the hearse.

The driver saw the procession and swerved into a slip road used for parking in front of a row of shops. A crowd of youths broke away and ran towards it. The driver tried to reverse at speed down the Andersonstown Road away from the funeral, but was blocked by black taxis. The crowd surged towards the car.

A shot rang out, and, in panic people started running back towards the funeral cortege which had stopped. A group of youths then surged forward once again towards the car, and one man with an iron bar started hammering in the top and breaking the windows.

A man in a pale green sweater was dragged out and hauled past us, his face covered with blood. He was pulled into a yard adjoining Casement Park GAA club and the high gates were slammed behind him.

The funeral procession started moving again towards the cemetery. Rumours began to sweep through the bystanders that the two men were members of the RUC Special Branch. A hundred yards or so back up the road towards the church, shots rang out. They seemed to come from a car park adjoining the St Agnes Community Centre. Shopkeepers started pulling down their steel shutters. As I walked up the road and into the car park, a small crowd which had gathered there began to melt away. One young man passed me and said: “Short and sweet, good enough for him.”

I saw a priest kneeling beside the body of a young man, stripped down to his underpants and shoes and socks, with blood on his chest and head. Father Alex Reid was administering the last rites, making the sign of the Cross on the young man’s lips. His eyes were open and he was moving his head from side to side.

Father Reid said: “He’s still alive.” He asked me if I knew how to do mouth-to-mouth resuscitation, then asked me to go for an ambulance, and he began to give the kiss of life himself to the dying man. His courage and compassion redeemed us all. It sent one image of Ireland across the world that spoke of human pity in the face of death rather than the savagery of the mob.

A local bookmaker’s shop let me in, and people inside helped me to phone for an ambulance. Their kindness too throws back the lie that the people of west Belfast are savages. When I came out again there were two bodies; I suppose the other one had been there all along and I hadn’t seen it. The ambulance and the army and police had arrived. Both bodies were covered with tarpaulins and blood was seeping from them. I could not see the priest anywhere and nobody could tell me how the soldier to whom he had administered had died.

Inside the bookie’s shop a man said to me: “If anyone tried to help them, they’d have been killed too.”