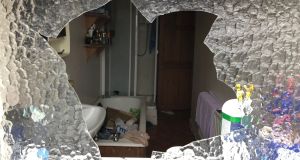 A broken window is seen in the house at Falsk, near Strokestown, Co Roscommon, where burnt out vehicles and smashed windows are testimony to violence that happened at the property on Sunday. Photograph: Peter Murtagh 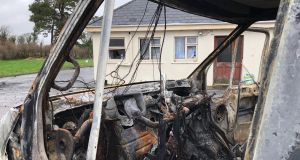 One of the burnt out vehicles in the yard of the house at Falsk. Photograph: Peter Murtagh 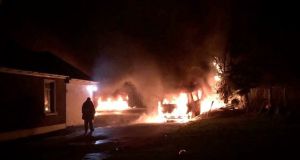 A still from a video on Sunday morning showing vehicles on fire at the house in Falsk. The Democrat Newspaper

KBC can only take possession again of the contested property in Co Roscommon by going back to the High Court or recruiting more security workers to carry out the existing court order to vacate, informed legal sources have said.

The eviction of farmer Anthony McGann, along with his sister and brother, from Falsk, near Strokestown, Co Roscommon, last week was ordered by the High Court after a judgment was given against him.

The adult siblings of Mr McGann, returned to the site on Monday evening

The eviction of the three siblings from the house subsequently saw violent clashes between a private security firm, which enforced the court order and carried out the eviction, and a group of masked men armed with baseball-bats who arrived at the house early on Sunday morning.

This group of men stormed the property and during the ensuing confrontation the eight private security men were assaulted, three of whom required hospital treatment. A number of vehicles were also burned out during the attack.

KBC bank, which secured a High Court order to repossess the property, now faces having to start the eviction process again if those inside the house do not agree to leave.

“The bank can go back to the High Court and secure an order that would involve the gardaí removing them from the house,” said an informed source.

“Or KBC could recruit another group of security workers to go to the property and remove anyone in the house.

“They can send another group of security men under the order they already have, with no need to go back to the High Court.”

There are tensions in the area over the eviction and subsequent violent confrontation and this seems set to continue with Republic Sinn Féin urging people to join a protest on Sunday.

The republican group, with links to dissident terrorists, has published a call to action on Tuesday, urging people to gather in Strokestown on Sunday to protest at the eviction.

If the rally goes ahead, a major Garda security operation will be put in place.

Republican Sinn Fein, which has had links to the Continuity IRA, said it is planning to organise and lead a protest over the eviction.

“Anyone available, please come to Strokestown, Sunday, for a protest at the recent eviction and beating of a local family by unlicensed hirelings,” the group said.

“Rural (or) urban is doesn’t matter. The people of Ireland are slowly becoming little more than tenants to foreign landlords.

“Not since the mid 1800s have so many taxed into poverty and under threat of eviction. Meet in the square at noon.”

Garda sources suspect the raid on the McGann property that effectively removed the security workers who had taken possession of it had all the hallmarks of a paramilitary operation.

Mr McGann, who was forced to pay €429,501 to settle a Revenue tax debt in 2015 for underdeclaration of VAT, has had a number of judgments against him, including one for non-payment of a loan on a Land Rover.

Video footage posted last night on social media showed gardaí advising the farmer to get a solicitor in view of the court order against him and under which he had lost his home.

On Monday, gardaí left the farmhouse at Falsk after what were described as “very polite” exchanges between a garda and Mr McGann, who were on first-name terms.

Confirming that one of the McGann brothers and their sister, Geraldine had returned, a family friend, Donal Hanley, said they wanted to take their home back. The financial issues that led to the eviction are “a private matter”, he said.

Taoiseach Leo Varadkar, and Minister for Justice, Charlie Flanagan had condemned the “violent actions of vigilantes, which have led to injuries, animal deaths and very serious property damage”.