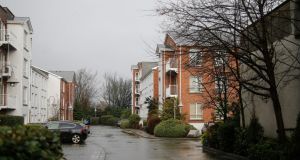 A fire prevention officer is inspecting an apartment complex in Dublin 8 after a series of audits revealed serious fire safety issues there.

The officer has the power to close the complex if the block is found to be a serious fire hazard, or to put deadlines on the management company to carry out remedial works.

Apartment owners were given a €3 million bill this year to remedy multiple and widespread problems, including deficient lighting and alarm systems and walls that would not contain a fire in one of the apartments for the required length of time.

Orla Hegarty, an architect and an assistant professor at the school of architecture, planning and environmental policy at UCD, says it is “highly unlikely” that the local authority would order the evacuation of St James’s Wood in the first instance.

“The Fire Services have extensive powers to act in a situation where they think that people are in danger, however it is unlikely that they would evacuate the building, as happened in Priory Hall. More recently the policy has been to require the owners to undertake remedial works to make the building safe rather than intervening to protect the residents.”

It’s terrifying to hear that the estate could be closed down, and it could happen almost immediately ... It’s very shocking

However, Ms Hegarty said issues around the lack of adequate fire detection and alarm systems and incomplete fire compartmentation can be very dangerous.

“If the compartmentation between apartments is broken by service runs or other breaches in the walls and floors, it means that a fire will not be contained in one area, and this reduces the time for people to escape from other parts of the building.

“That was one of the contributory factors to the speed of the smoke spread in Grenfell [Tower in London] – when the building was refurbished, the apartment layouts were reconfigured and the compartment walls were breached by services.

“When they put in those new walls they didn’t close off those gaps so that’s why smoke and fire spread much more quickly than it should have.”

She said there was a clear need for independent inspection of construction to prevent these problems from arising in the first place.

One of the residents of St James’s Wood, who is renting there and spoke on condition of anonymity, said the reports were “very worrying”.

“It’s terrifying to hear that the estate could be closed down, and it could happen almost immediately ... It’s very shocking and something that you never think will happen in your own estate,” he said.

“There’s a liability here if these buildings were supposed to be delivered to a certain spec and everything was signed off on, but they weren’t delivered to that spec. Surely somebody has to foot the bill for that and it shouldn’t be the residents.

“It’s not good enough for the State to say that this is a private issue and not step in.”

St James’s Wood Management CLG wrote to The Irish Times on Monday to say that a “schedule of works and tender documents have been prepared and a team has been appointed to carry out the works.

“All efforts and avenues are being explored to pursue the original developers.”