O’Mahony’s death would have been immediate, says State pathologist 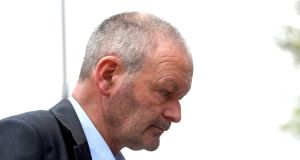 Michael Ferris has pleaded not guilty at the Central Criminal Court in Tralee to the murder of John Anthony O’Mahony. Photograph: Domnick Walsh

A 73-year-old Kerry farmer died from “absolutely horrific injuries” to his upper body, his face and skull after he was repeatedly stabbed by the prongs of a teleporter, a murder trial has been told.

Michael Ferris, of Rattoo, Ballyduff, Co Kerry, aged 63, has pleaded not guilty at the Central Criminal Court in Tralee to the murder of John Anthony O’Mahony aged 73 , of Ardoughter, Ballyduff, at Rattoo on April 4th, 2017.

State pathologist said Mr O’Mahony’s body was found with his seat belt partially around him, his head slumped on his chest, while there was a large amount of broken glass in the car.

He had suffered multiple injuries and fractures and “gaping wounds”. One of the wounds had gone right through the skull and brain tissue could be seen. There were injuries to the mouth, abrasions to the limbs, multiple fractures of the pelvis, injury to the groin, injury to the lungs. There were at least five penetrating wounds; two of them had gone right through the body, to the back, the pathologist said, adding that his liver had been “torn, totally pulped”. Death would have been immediate, she said.

Aaron Brady found guilty of capital murder of Det Garda Adrian Donohoe 12:23
Covid-19: Restrictions an attempt to prevent State going back to ‘beginning’ 10:37
Sunny spells forecast with high temperatures of 26 degrees 09:02
A new species of dinosaur discovered on the Isle of Wight 08:38
An Garda Síochána criticised for Irish-language law non-compliance 07:00