Disclosures Tribunal: the accounts of politicians 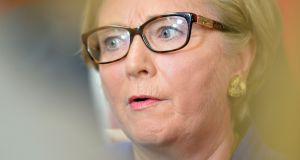 Former tánaiste Frances Fitzgerald: the role she played when responding to information about the Garda legal strategy in the O’Higgins tribunal has been vindicated. Photograph: Dara Mac Dónaill

The Disclosures Tribunal found all politicians who were interviewed, or who gave evidence, in relation to various alleged smear campaigns against Sgt Maurice McCabe had been honest, with Mr Justice Peter Charleton accepting the veracity of their evidence.

Besides the vindication of the role played by former tánaiste Frances Fitzgerald when responding to information about the Garda legal strategy in the O’Higgins tribunal, another six TDs and former TDs gave evidence.

Alan Shatter was minister for justice and equality until his resignation in 2014. He told the tribunal he had asked then Garda commissioner Martin Callinan about Sgt McCabe in 2013.

Mr Shatter had asked Mr Callinan if there was something else in the background about Sgt McCabe he should know. The commissioner had replied that some years beforehand an “allegation was made of a sexual nature in relation to Sgt McCabe, that it had been fully investigated and the DPP had directed there was no basis for a prosecution”, the tribunal heard

“And I asked him were there any similar further allegations made and he said no. And he then speculated that perhaps Sgt McCabe was upset at the manner in which the matter was dealt with.”

He told the tribunal: “My only perception of it, contrary to the way Martin Callinan has been portrayed, was he didn’t make a big deal out of it. My perception was that whatever the allegation was it wasn’t a major issue.”

In his report, Mr Justice Charleton has said the “tribunal fully accepts this evidence. Also accepted is Alan Shatter’s testimony that he, unlike many other politicians, had never heard any rumour around Leinster House or elsewhere about this topic. As he said, it was perhaps his position as minister and the barriers surrounding direct contact which explains that.”

However, he goes on to say: “Alan Shatter’s testimony as to commissioner Martin Callinan, while clearly true, contrasts markedly with other evidence as to the attitude of commissioner Callinan.”

Two Independent TDs, Clare Daly and Mick Wallace, have been instrumental in highlighting Sgt McCabe’s allegations and case, and were among those who also put Supt Dave Taylor’s (now discredited) allegations into the public domain.

The tribunal report focuses on conversations they had with Supt Taylor in which he had claimed hundreds of text messages had been sent out to discredit Sgt McCabe, some of which had been copied to then commissioner Nóirín O’Sullivan, to which she had replied “Perfect”, Supt Taylor had said.

The tribunal concluded there was no basis for this .

The tribunal report says: “In common with Clare Daly TD, Michael Wallace TD came across as intent on telling the tribunal the truth and eschewing any form of exaggeration. Neither had spoken about this matter publicly without first of all doing basic checking. In the meeting with Supt David Taylor, in the company of Deputy Daly, Deputy Wallace had got the same impression, that messages against Maurice McCabe were distributed through the head of the Garda Press Office by electronic means.” This as the tribunal concluded was not the case.

The tribunal also accepted the evidence of John McGuinness TD and former chairman of the Public Accounts Committee, and John Deasy TD (and others including Comptroller and Auditor General Séamus McCarthy) to the effect that Mr Callinan “had a very low opinion of Maurice McCabe, that he was prepared to specify why, and that his view was that he, as his ultimate commanding officer, was the victim of an utterly unreliable individual”.