Kerry crowds cheer on the Roses... but slip off for the match

Annual contest begins on Monday, with some hopefuls donning the green and gold 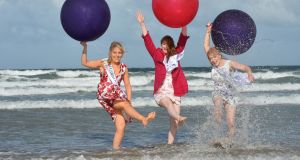 As the ball was thrown in at yesterday’s All-Ireland semi-final clash between Kerry and Mayo, crowds on Denny Street in Tralee quickly slipped off to the nearest bar or hotel showing the game.

Hundreds had gathered despite the showery conditions to watch the second of three parades in celebration of the Rose of Tralee festival.

The parade had been slightly delayed getting started, prompting some grumbling in the crowd. “Do they not know Kerry are playing in half an hour?” moaned one spectator.

The big match didn’t go unnoticed by the Roses, with some donning green and gold headbands alongside their sashes.

Last year’s winner Maggie McEldowney from Chicago led the festivities followed by this year’s Roses who waved at the crowds on large floats while grinning widely. The escorts travelled alongside the Roses high-fiving young children.

In the lead up to the televised shows on Monday and Tuesday, the Roses have travelled throughout the county, taking in the Kingdom’s tourist hotspots in Dingle, Kenmare and Killarney.

This year’s 64 hopefuls were cut back to 32 for the live shows, with the two successful batches of 16 announced privately on Thursday and Saturday.

There is no repeat this year of RTÉ’s fly-on-the-wall coverage which last year captured the hopefuls being split into two groups and subsequently learning their fate.

A street trader on Maine Street yelling “hats, scarves and headbands” said that despite criticism aimed at the televised cull of contestants last year, TV coverage had only enhanced the annual competition.

“Although it’s been quiet enough around the town the last couple of days, it’s definitely more popular than ever, and that’s down to the TV,” he said.

“It seemed to dwindle a bit for a while but it’s like it’s back in fashion now. It’s popular again.”

No doubt last year’s Sydney Rose Brianna Parkins drew much attention to the competition when she called for the repeal of the Eighth Amendment.

Asked about the prospect of a similar intervention this year, the festival’s communications manager John Drummey said: “We respect the fact that they [the Roses] all have their own opinions on various matters right across the board.

“In saying that, we do remind them that the Rose of Tralee is an entertainment show in terms of television and it’s a festival. It’s not a current affairs programme.

“While we respect their views, we don’t believe that this is the forum with which to express them. They seem to understand that and respect our views on it being an apolitical organisation.”

The current bookies’ favourites are Down Rose Orlagh McNally, San Francisco Rose Amanda Donohoe, Sydney Rose Aisling Walsh and Dublin Rose Maria Coughlan. Ms Donohoe is the sister and cousin of two of the young people who died two years ago in the Berkeley balcony tragedy.

While Kerry fans will have to wait that bit longer as they face Mayo again next Saturday evening, coverage of The Rose of Tralee Festival begins on Monday on RTÉ One at 8pm.