Divers rescued after failing to surface off Dublin coast 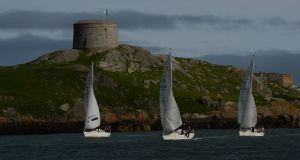 The divers drifted far away from their dive boat because of strong currents around Dalkey Island. Photograph: Cyril Byrne

Two divers were rescued after they got into trouble off the coast of Co Dublin on Sunday afternoon.

An alert was sounded at 3.08pm when the two men failed to surface during a dive.

They drifted far away from their dive boat because of strong currents around Dalkey Island.

The coast guard teams searched an area of coast from Cullimore Harbour to Killiney Beach, a distance of 15 km.

Within minutes coast guard members looking off Whiterock spotted the divers being pushed towards the coast with the tide and wind.

All vessels were alerted and the dive boat recovered the two who were in good spirits despite their ordeal.

“The expression I heard was ‘smiley faces’,” said Dún Laoghaire Coast Guard spokesman Kyron O’Gorman. “They had great equipment on them and they had a lot of training. They had a lot of safety aids to help in the event of an emergency like this.”

The lifeboat at Dún Laoghaire also went out to rescue the occupants of a small 4m boat which suffered engine failure. The boat was brought ashore in Dún Laoghaire Harbour.