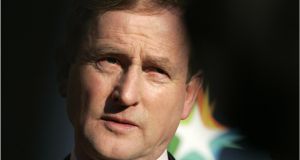 Enda Kenny: he claimed Udarás na Gaeltachta had achieved the highest increase in job-creation since 2005 and that 600 new jobs would be created in Gaeltacht areas next year

Taoiseach Enda Kenny has pledged a fifth of places on public service application panels will be for candidates able to speak Irish fluently.

In an interview with TG4, Mr Kenny said he favoured a higher level of recruitment of Irish speakers to ensure that people could conduct business in Irish.

At the moment, State bodies, including Government departments, are obliged to include at least no less than 6 per cent Irish speakers on panels. This has drawn criticism from Irish-language groups, which have claimed that many Irish speakers have difficulties when trying to engage in Irish with the State.

Not all those selected on panels will be successful in being employed by the State.

He also claimed Udarás na Gaeltachta had achieved the highest increase in job creation since 2005 and that 600 new jobs would be created in Gaeltacht areas next year.

Asked about the 20-year strategy for Irish, Mr Kenny denied nothing substantial had been implemented almost six years after it came into operation.