Keith Byrne’s family welcome his release from custody in US 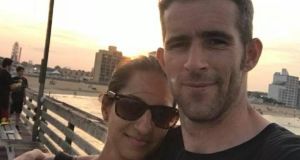 The family of Irishman, Keith Byrne has expressed their relief and delight that he has been freed from custody in the US and allowed return home to his family pending an appeal against a decision to deport him back to Ireland.

Mr Byrne’s sister, Melinda told The Irish Times that she could not believe the news when her sister-in-law, Mr Byrne’s wife, Keren rang today to say that a federal judge had ordered his release from Pike Pike County Correctional Facility in Pennsylvania pending an appeal.

“Keren rang to say that Keith has been taken from deportation and allow go home to Philadelphia pending an appeal – we were just screaming down the phone at her we were so delighted – we still can’t believe,” said Ms Byrne.

Mr Byrne (37) was on his way to work in Montgomery County where he has built up a successful painting and decorating business, when he was arrested at the side of the road by Immigration and Customs Enforcement officers on the morning of July 10th.

He has been held since in the Pike County Correctional Facility, a prison in Philadelphia and last Friday, he signed passport documentation presented by ICE to facilitate his deportation back to Ireland rather than risk the prospect of spending up to five years in an American jail.

Ms Byrne said that it had been a hugely traumatic experience for her brother and his family including his wife, Keren (34), stepson Ezra (13), daughter Leona (6) and son Gabriel (4), since his arrest and incarceration in Pike County Correctional Facility.

“It’s been hugely traumatic for the children – how can we explain it the children when we don’t fully understand it ourselves – they’ve been deeply traumatized by all this but at least now Keith can go home to them during this part of the process.

Ms Byrne that her brother had originally gone to America in 2007 on a US Visa Waiver Program but had overstayed that by a number of months and was planning to return to Ireland when he met Keren on the week he was planning to leave.

Ms Byrne said the couple “fell madly in love and married a year later” and Mr Byrne later set about trying to regularize his position in the US by paying a financial contribution for his failure to abide by the US Visa Waiver Program.

However, she explained that in the course of attempting to regularize matters, he volunteered information to his lawyer that he had a minor conviction in Ireland for simple possession of cannabis and that was included in his application for citizenship.

Ms Byrne said that her brother, while applying for US Citizenship in 2010, following his marriage to Keren in 2008, had obtained a social security number, paid taxes and obtained a driving licence and had been in contact with ICE on a regular basis.

One of a family of 11 from Beechfield in Fermoy in North Cork, Mr Byrne has been in touch with his wife, Keren on a daily basis while he has also spoken to his father Jim and other family members back in Ireland over the past 15 days since his arrest, she said.

Ms Byrne said that while details were still sketchy, she believed that her brother’s US lawyer had brought an application before a federal judge, arguing that his last appeal against a refusal to grant him a Green Card had failed to take account of certain aspects of his case.

Ms Byrne said that they had no idea at this point when the new appeal would be heard but the most important thing was he was now re-united with his family and she was hopeful that he would be successful whenever the new appeal is heard.

“Keren was still in shock when she rang me so she was leaving to go and pick Keith up to bring him home – Pike County Correctional Facility is a two and a half hour drive from their home so it will be later today before he’s actually reunited with his family but we are just relieved.”

Ms Byrne paid tribute to Tánaiste and Minister for Foreign Affairs, Simon Coveney and the Department of Foreign Affairs officials including Anna McGIllacuddy and both Irish Embassy and Consular staff in the US who have been hugely supportive.

She also paid tribute to her brother’s US lawyer, Tom Griffin and Irish solicitor, Michael Kingston and others who had lobbied for his release. “I would also like thank to all the people who supported us and helped keep it high profile which has obviously reaped rewards.”