Judge urges exclusion of public from rape trials in North 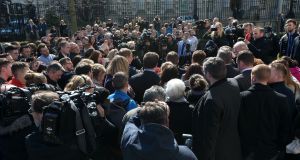 The public should be excluded from rape trials in Northern Ireland, retired senior judge Sir John Gillen has recommended in his preliminary review of how the law deals with serious sexual offences.

The review, which now goes out to consultation, was ordered in the wake of the controversy that was triggered after two Ireland and Ulster rugby internationals, Paddy Jackson and Stuart Olding, were acquitted of rape earlier this year.

The retired Court of Appeal judge’s report contains 16 key recommendations but, unlike the situation in the Republic, he does not propose that defendants in rape cases should be anonymous before or during trials.

He recommended that those accused of rape should not be named before they are charged but that they should be publicly named once charged.

Other proposals include restricting access to serious sexual crime trials to close family members of the complainant and defendant; the introduction of legislation to manage the danger created by the inappropriate use of social media; challenging “myths” about rape; introducing measures to address the vast under-reporting of serious sexual crime; and the option of a “measure” of publicly funded legal advice for complainants.

“It is estimated that just one in about six rapes in Northern Ireland is reported to the police.

“If we are to challenge the gross under-reporting, high drop-out rates and an unacceptably daunting trial process, I consider the arguments in favour of restricted access measures carry convincing weight,” said Sir John.

During the trial of Mr Jackson and Mr Olding, and two other men who were acquitted of lesser charges, the name of the complainant was released on social media.

There were also warnings during the trial that some of the commentary on social media could jeopardise a fair trial.

Sir John and his review team were in direct contact with more than 200 individuals and organisations including complainants, former defendants after acquittal, statutory and voluntary organisations, members of the judiciary and those involved in the legal profession to hear first-hand evidence and accounts of their experiences.

Sir John’s report urged better education around sexual crime and rejection of several myths about rape, such as victims provoke attack by the clothes they wear or that rape is a crime of passion.

“I found it really harrowing, sitting and listening to these complainants. I spent an hour-and-a-half with each of them. The saddest thing was that in many cases they bought into the rape myth,” he said.

He added that often victims felt ashamed and wondered what they could have done differently.

“The refusal to accept that the victim is never ever to blame in any way, any shape or form, is something that not only does the public not seem to fully understand, in some instances, but even the victims, even the complainants,” he said.

“We need some radical rethinking of societal attitudes to sexual abuse in the wake of public campaigns.”

Sir John stressed that his report also considered the voice of the accused and spoke to many who had been cleared of serious sexual crime.