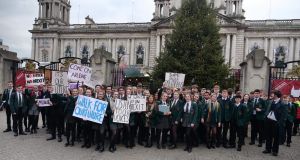 Our Future, Our Choice Northern Ireland: students from Lagan College call for a people’s vote on the final Brexit deal. Photograph: OFOCNI/PA Wire

More than 200 students from four schools in Belfast have walked out in a protest over the draft Brexit deal agreed last week between UK and EU negotiators.

Pupils from Lagan College; Wellington College; Methody College; and Our Lady and St Patrick’s College, Knock took part in the demonstration on Monday.

The campaign was co-ordinated by organisers with Our Future, Our Choice NI, a group of young people in Northern Ireland campaigning for a people’s vote on the final Brexit deal.

The Lagan College walkout organising committee said: “Us politics students at Lagan College have become frustrated with how the politicians in our country and the rest of the UK have ignored the opinions and views of young people regarding the issues of Brexit and other political issues.

“We didn’t get the chance to vote on the outcome of our future, so we want to take this final opportunity to express ourselves and our views.”

It said: “We have grown as a movement and throughout our time working we have been encouraging young Northern Irish people to become involved in politics and allowed them to have a voice.

“We are delighted to have been able to inspire and support the school students who are involved in this event. They are an inspiring selection of students and we hope that others will be inspired by their actions.” – PA