Deal versus ‘no deal’ a false choice, Arlene Foster claims 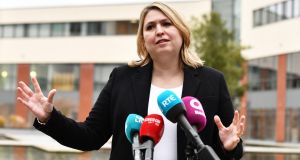 DUP leader Arlene Foster has accused the British and Irish governments of creating a “a false choice” between accepting the draft withdrawal agreement or having no deal.

Ms Foster said on Monday that the Brexit deal would lock the United Kingdom into the European Union “with no way out”.

Ms Foster also renewed her criticism of Taoiseach Leo Varadkar, saying: “The Taoiseach’s comments that the Irish Government is not contemplating a hard border in the event the withdrawal agreement is rejected by [the British] parliament underlines why a focus on the backstop was only ever a negotiating tactic by the European Union.

“We have been told that the backstop is only necessary to prevent such a hard border, but these comments make it clear that the EU’s insistence on a backstop was not aimed at this,” she said.

“The European Union’s focus on the Border between Northern Ireland and the Republic has only ever been a negotiating tactic to secure its own aims in the negotiations.”

The DUP has come under pressure from business groups in the North to support the agreement but Ms Foster said: “I appreciate the concerns people have about a no deal but this should not be a binary choice. It is absolutely clear that it is time to work for a better deal.

“The agreement that has been put on the table is clearly not a good deal and no one should be forced into accepting another false choice.”

“It’s now very clear right across Ireland, North and South, that key voices from business, agriculture and other sectors are coming out and facing down the very negative politics advanced by the DUP and the Tory Brexiteers, ” said Ms McDonald.

Earlier, northern secretary Karen Bradley urged her fellow MPs to “put the national interest first” and sign up to the draft Brexit deal.

She also suggested that failure to accept the deal would result in a hard border between the North and the South. If World Trade Organisation rules applied in the event of no deal then there would have to be border checks, she told a conference of more than 70 leading Northern Ireland business people on Monday.

As the DUP continued to warn that the draft deal was a threat to Northern Ireland’s union with Britain, Ms Bradley told business leaders no such threat existed.

“The agreement preserves the economic and constitutional integrity of the United Kingdom, upholds the Belfast Agreement, and ensures people and businesses that rely on an open border between Northern Ireland and Ireland can continue living their lives and operating as they do now,” she said in her speech.

Ms Bradley, when speaking at the Belfast Met College in the city’s Titanic Quarter, made no direct reference to the DUP – “I am not singling any party out,” she said – but insisted that “compromises have to be made, accommodations have to be made”.

Several speakers disputed claims by senior DUP politicians that business leaders did not understand the constitutional threat inherent in the deal.

Angela McGowan, director of Confederation of British Industry NI, said: “My members don’t see this as any threat to their Britishness or their nationalities, and don’t see it as a threat to the constitution.”

Trevor Lockhart, chairman of CBI NI said: “Nothing in the deal undermines the constitutional integrity of the United Kingdom.”

Tina McKenzie, head of the North’s Federation of Small Business said Northern Ireland could not afford the disruption of a no deal: “We are fully aware of what a hard Brexit would do to our economy.”