John and Pat Hume Foundation to be launched on Friday

‘Hugely important’ that charity is named after both his parents, says John Hume jnr 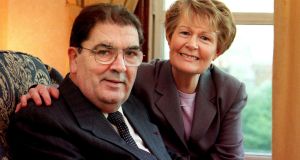 John Hume and his wife, Pat, at home in 1999. Photograph: Bryan O’Brien

A foundation to promote the legacy of John Hume and his wife, Pat, is to be officially launched in a virtual ceremony on Friday.

The John and Pat Hume Foundation aims to “inspire the next generation of peacemakers” and will draw inspiration from the Humes’ values to “support our young people to navigate the profound challenges of their time”, said the foundation’s chairman, Prof Seán Farren.

Among the patrons will be former US senator George Mitchell, who chaired the talks that led to the Belfast Agreement, and former president Mary McAleese. Members of the Hume family are also closely involved.

The registered charity will be funded by donations. It will be based in the Humes’ home city of Derry, but future launch events are planned for Dublin, Brussels and Washington. Martin Luther King III will give its first lecture, on leadership for peaceful change, on November 19th.

The Humes’ youngest son, John jnr, said the Hume family was “hugely supportive” of the foundation and were “very thankful to the many people who have made a huge effort to get it this far”.

He explained that the foundation would take its inspiration not just from his parents’ work to create peace in Northern Ireland but also from their principles of social and economic justice, self-help and education.

“There are a lot of very simple but important issues or messages that were very much part of dad’s political thinking that are as important today in the new world that we live in,” he said.

“Dad would say it himself: the likes of the credit union was one of the greatest things he did because it pulled so many people out of poverty. The idea of the whole community helping itself was very much central to everything he set out to achieve and that will be very much reflected in the programme,” said John jnr, as would the “sheer power of education and how it can transform society”.

The foundation’s work could also include scholarships that would share lessons of Northern Ireland with other areas of conflict around the world.

It was “hugely important”, John jnr said, that the foundation had been named after both his parents.

“They were very much a team, they found inspiration and determination from each other and I don’t think dad would have achieved a fraction of what he did without mum behind him.”

Since his father’s death in August, he said, “the thousands of messages that mum, myself, all of us have received have really touched us in many ways, and I know from my mother’s perspective it’s been a huge comfort to her”.

He said it was “great to hear” US president-elect Joe Biden talking about protecting the Belfast Agreement at this critical time. “The fact that he is prepared to say that so openly and so prominently in his first days in office I think shows how much these prominent figures in America actually do care. It does matter to them.”