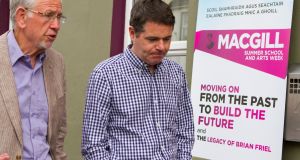 Those attending the summer school this week heard arguments that retirement is bad for you, a notion that sits well with Dr Joe Mulholland, who, since its foundation in 1981, has been the driving force for the annual Glenties gatherings.

Psychologist Prof Ian Robertson from Trinity College Dublin, in discussing ageing on Thursday, noted how people such as Donald Trump and Rupert Murdoch were thriving while working into later life.

Mulholland, who sometimes can be perceived as rather earnest, challenged this assumption, remarking that having much younger wives and having had a plurality of them – as is the case with Murdoch and Trump – might also be a factor in their continuing rude health, ambition and energy. The crowd enjoyed that quip.

Mulholland, who is far from humourless, after so many years at the helm is not quite planning to retire from the directorship of the school. At 75, though, he would like to step back a bit, to remain its “guiding light”, but to hand over some of the gruelling organisational work to others.

He is in good fettle. The Donegal man says he has always enjoyed a robust constitution. During the festival he swims every morning in the very bracing wild Atlantic off nearby Portnoo, apart from Friday morning when he took time out to speak to The Irish Times in the Highlands Hotel, nerve centre for the school.

And yes, he has heard some of the criticism of the MacGill festival. This was prompted by Sinn Féin TD Eoin Ó Broin who, during Monday’s debate about the aftermath of 2016 and the future of politics in Ireland, said he always had the sense the MacGill school was the “political and media establishment talking to themselves”. This was taken up by some Twitterati to make the accusation that MacGill was a bit of a “snore fest”.

It did not particularly bother Mulholland, but he defended the school on Monday night and also in this conversation. Since its inception, there have been two elements to the school: the arts, with the focus on writers such as Patrick MacGill, Seamus Heaney and Brian Friel – whose works and memory again were celebrated this week – and politics, the side which has come to dominate proceedings.

Mulholland says since he was a young teacher and since he ran RTÉ’s flagship Today Tonight current affairs programme, what has obsessed him is how “to achieve good governance” in Ireland. “It’s about getting the place to work.”

He says what MacGill has shown is that there is an “absolute hunger for such discussion” from regular people who care and worry about Ireland, who are invested with a quiet sort of patriotism. That was apparent during the exhausting week of debate. And it is gruelling.

Thereafter from Monday to Friday there were three 2-2½ hour debates each day that included enthusiastic question and answer sessions with the audience. There were full houses throughout the week. Taoiseach Enda Kenny spoke on Monday and stirred the pot with his talk of a Border poll sometime down the line.

There were Ministers and politicians aplenty – Leo Varadkar, Paschal Donohoe, Simon Harris, Heather Humphreys, Brendan Howlin, Eamon Ryan, Richard Boyd Barrett, Mairéad McGuinness, Noel Dempsey, Colum Eastwood and many more. There were academics and experts in a wide range of fields, including the head of Europol Rob Wainwright and Irish academic Dr Paul Gill, who had very interesting things to say about the profile of such mass murderers as Mohamed Laouaiej-Bouhlel, who killed 84 people in Nice on July 14th.

Arguments on important subjects were thrashed out on stage and in the bar of the Highland Hotel later, on matters such as running the country, Brexit, global terrorism, the Garda, housing, Irish Water, climate change, health, ageing, demography and the future of rural areas such as Glenties and this beautiful part of west Donegal. So, Mulholland is sure, accusations of elitism and irrelevancy just don’t stand up.

I was struck by one woman, a just retired teacher, making a point to tell Mulholland it had been “one of the most important and interesting weeks” of her life. “That’s precisely what I am saying,” says Mulholland, “people are crying out for such discussion.”

Which brings him back to the issue of retirement. Mulholland in a rational rather than boastful way knows that such enterprises need a committed singular leader, which he is. Due to pressure of RTÉ work, he handed over the directorship for a few years in the 1990s, a time when the scale and popularity of the school noticeably dipped. On his return, it was back to business as before.

In recent weeks, his intention was that this would be his valedictory school but he has changed his mind, he says, his friends telling him, “you can’t walk away in the present circumstances”.

“What needs to be done now is put it on a better structure to ensure its continuity, organised in such a way that it would take a lot of burden off my shoulders and leave me as the guiding light,” he says.

He has no idea who might take on some of the burden but knows the type of man or woman who is required. “This needs someone with commitment and dedication and a kind of vocation to changing Ireland.” That is work in progress.

I remind him at the end of the interview that as a cub reporter with the Donegal Democrat, I first met him 35 years ago when we both had a mutual interest in the writings of the Glenties writer Patrick MacGill, author of still powerful books such as The Rat Pit and Children of the Dead End.

Then Mulholland was writing MacGill’s biography. Isn’t it time he finished the confounded thing? He laughs. “Forty years ago I started writing the book and 40 years on I am still intending to write it. As they say, more books were written in pubs than were ever published. But I do intend to write it.”

With the summer school still demanding his focus and vigour, that belated work might have to wait a little while yet.