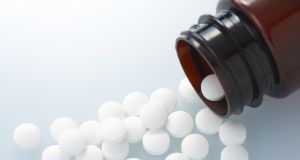 Just over €785,000 was paid in fees to Hickeys Pharmacy Group Limited in Dublin north central.

One pharmacy in Dublin received more than €1.3 million in fees for dispensing drugs and medicines under various State community schemes last year.

The figures, released by the HSE on Tuesday, showed that a pharmacy in south west Dublin, identified as Median Healthcare Services, received €1.306 million in various fees, mark-ups and payments for operating pharmacy schemes under the General Medical Service.

Just over €785,000 was paid in fees to Hickeys Pharmacy Group Limited in Dublin north central.

A pharmacy identified in the HSE report as Abbey Healthcare Limited in Dublin south/Dún Laoghaire received €746,129 in various payments under the State schemes.

The HSE was unable last night to say whether the payments related to a chain of pharmacies or one individual outlet.

The HSE figures show that the dental practice of Paul Fitzsimons received €381,735 in payments last year for operating State schemes.

The figures also reveal that the dental practice of Eamonn Thomas Noonan in Limerick received payments of €368,698.

The dental practice of John Heeney in north Dublin received €287,769 in payments for operating the State schemes.

The Irish Pharmacy Union (IPU) said on Tuesday that the pharmacy sector continued to operate in an increasingly difficult environment, “with cuts imposed through the (financial emergency) Fempi legislation and, more recently, the ongoing aggressive implementation of reference pricing putting many pharmacies under increased pressure”. At a time when fees to pharmacists have significantly reduced, the operating costs for pharmacists, such as staff salaries, premises, insurance etc, continue to increase.”

“A recent review by accountants Fitzgerald Power calculated that, since 2009, the State has extracted at least €2.64 billion in overall savings from community pharmacy payments, through a combination of reduced reimbursements for medicines, as well as significant cuts to pharmacists’ remuneration through fee reductions and elimination of mark-ups on State-funded schemes. This is a substantial deterioration in income in a market that continues to remain difficult with increased competition, reduced expenditure on health and reference pricing. With an increase in the level of items dispensed and a reduction in fees, pharmacies are now doing a lot more for less.”

The chief executive of the Irish Dental Association (IDA) Fintan Hourihan said on Tuesday: “We are angry that details of these payments have been released when the Office of the Data Commissioner previously ruled that these figures constituted personal data and upheld an IDA challenge to their publication. We believe it’s misleading and unhelpful to publish raw data without any reference to the massive cuts which have been made to the medical card scheme since 2010 or indeed to the costly overheads that dentists have to meet to provide care for their medical card patients.

“While these selective figures might lead some to believe that the HSE is spending substantial amounts of money on providing dental care for medical card patients, those of us living in the real world know that they pale into insignificance when compared with the €0.5 billion which has been cut from the medical card and PRSI schemes since 2010.”