Jim Gavin awarded the Freedom of the City of Dublin 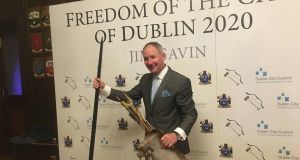 Jim Gavin attending the Freedom of the City of Dublin ceremony on Saturday night in the Mansion House.

Jim Gavin, the manager who steered Dublin to win five All-Ireland Senior Football Championships in a row, has been awarded the Freedom of the City of Dublin.

The Dublin men’s team also claimed five league titles and seven Leinster championship titles under Gavin’s stewardship before he stood down in November. Gavin was an All-Ireland winner in 1995 as a player on the Dublin team.

Lord Mayor of Dublin, Paul McAuliffe conferred the Honorary Freedom of the City of Dublin on Gavin at a ceremony in the Mansion House on Saturday.

Dublin City Council said the award was in recognition of “his contribution to public life and service to his county and country both on and off the pitch” and the honour was ratified by councillors in a vote last September.

Gavin, an assistant director of the Irish Aviation Authority, was joined by his family, several current Dublin players and members of his backroom team, players from the 1995 team, and members of the Defence Forces, which he served in as an Air Corps member.

“I’m a proud Dub, I love my city, it’s got a great heritage, a great history in it, a great future, I’m just proud to be part of that,” he said. “I’m so grateful for the players that I was fortunate enough to be involved with and manage, they’re the reason I’m standing here, I didn’t kick a football, they did all the hard work.”

A freeman of the city is traditionally presented with a bow and arrows by the council, and Gavin left with a framed miniature longbow.

However, he arrived for the ceremony equipped with his own full-sized bow, which was handcrafted by a historian from Co Clare.

“One of the ancient traditions is a freeman of the city has to carry a bow and defend the city, some might say I’ve been defending for awhile on the GAA fields,” he said.

While he said his days managing football at senior level are done, he is involved in coaching at his son’s club, Ballyboden St Enda’s in Knocklyon.

“We were coaching last night and playing a game with under-12s so that was great fun,” Gavin said.

Mr McAuliffe said Gavin is not “an emotional person, but you can see tonight the emotion is there”.

HSE audit finds problem with departing staff paying for Cycle-to-Work scheme 15:22
Health worker double-paid thousands for same shifts by HSE and agency 15:22
UCD to introduce class on how bystanders can intervene in harassment 15:02
Judge has ‘great sympathy’ for man set to lose his Co Louth home 14:49
Dublin man may have been stabbed to death by woman in parking space row 14:42