Jarveys in a jam: Killarney traffic threatens to be a tourist trap

Kerry beauty spot getting over 1.1m visitors a year, mostly between June and September 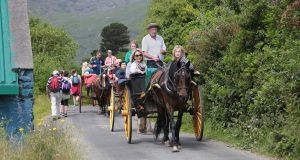 Jarvey Ted Kissane makes the trip along the Black Valley to Lord Brandon’s Cottage, where visitors will have lunch and depart in boats for Ross Castle, Killarney, Co Kerry. File photograph: Valerie O’Sullivan

For decades, the international image of Killarney has been one of jarveys carrying American visitors out from the town to local beauty spots. However, the reality in high summer can well be less lovely – traffic jams.

Today (Wednesday), hoteliers and members of the Killarney Chamber of Commerce are to come before a municipal meeting of Kerry County Council to plead for action to deal with traffic congestion.

They have done so before. A new car park will open this year on council-owned land on the northern side of town, but it will not be enough. A multi-storey car park along with an outer bypass are needed, local businesses say.

Killarney now gets more than 1.1 million visitors a year. Most come between June and late September. The town has more hotel beds than anywhere outside of Dublin in the State, selling nearly 1.6 million bed nights annually.

All it takes is one nervous tourist going the wrong way, afraid to reverse and meeting a camper van, and the whole road is blocked

However, roads and parking, some of which projects have been planned for 20 years but not acted upon, have not kept up. Twenty-minute traffic jams on all of the approach roads to the town, which has a resident population of 15,000, are regular.

Normally restrained in its public pronouncements, the local Chamber of Tourism and Commerce last September furiously complained about the council’s inaction, with its president Paul O’Neill saying visitors had endured “an ordeal” over the summer.

Local hotelier Tom Randles, who speaks locally for the Irish Hotels Federation, says: “Kerry County Council needs to get off their hands and start making decisions on traffic and parking. There’s been a lot of procrastination.”

If this original Irish tourist destination – popular since Victorian times – is feeling the pressure, one of the later Co Kerry favourites, Dingle, is feeling it even more. Even locals have learned to avoid the town during the summer months.

Roads on nearby Slea Head were designated as one-way only last year for heavy vehicles following a number of road-rage incidents. However, some have gone further, arguing that traffic lights are now needed.

“All it takes is one nervous tourist going the wrong way, afraid to reverse and meeting a camper van, and the whole road is blocked,” local councillor Seamus Cosai Fitzgerald says.

Fáilte Ireland, together with Kerry County Council, has applied for funding to develop the Slea Head Drive under the Rural Regeneration and Development Fund. An announcement from the Department of Rural and Community Development is due later this month.

Parking in Dingle is at a premium. Seventy extra spaces are coming on Green Street, and a relief road is also planned, but parking elsewhere in the town and roundabouts are badly needed, argues Mr Fitzgerald, along with others.

Last year, the chamber of commerce asked local people around Ventry and Ballyferriter to stagger their outings on the crowded roads and to consider scheduling going out at less busy times. Many, without encouragement, have already changed their habits.

Down in Portmagee, the hop-off point for the Skelligs, numbers visiting have grown dramatically on the back of the international publicity garnered from its place in the Stars Wars film. More parking is urgently needed, say locals.

However, Kerry’s tourism visitor numbers boom is not just on the back of more foreigners. The number of Irish visitors involved in outdoor recreation – from seaside to mountain-top – has grown phenomenally in the last decade.

People arriving from Cork, Dublin and elsewhere by car have simply no place to park, says Mr Fitzgerald, a keen walker himself. Carrauntoohill now sees 125,000 walkers a year. Groups are being asked to make appointments for the trip and have insurance.

However, lesser mountains such as Brandon have issues, too. Mountains within easy range of Killarney see cars parked up on the narrow N71, even at Christmas. More parking is urgently needed there also.

Maps, even ground markings, which would take people on set, timed walks, would ease much of the congestion

Parking is not the only issue, though. Public toilets should open longer into the evenings at beauty spots such as the Gap of Dunloe and Ballinskelligs, while shower rooms are needed for beaches in the county, say locals.

The Wild Atlantic Way has been a godsend, local tourist interests accept. However, it has brought challenges: “The concentration seems to be on marketing. What it really needed is infrastructure like car parks and traffic systems,” Mr Fitzgerald says.

Simple things are required as well. “Maps, even ground markings, which would take people on set, timed walks, would ease much of the congestion in and around Muckross House and Torc Waterfall,” says Emer Moynihan of Earls Court House in Killarney.

Despite the surge in numbers, there are clouds ahead – volatility in the US stock market and the drop in the dollar is causing anxiety, while Brexit casts its long shadow. British and Americans are Kerry’s top spenders.

This year’s 4.5 per cent hike in the tourism VAT rate is causing issues, since most tour companies have fixed prices for packages for this year and next, long before the increase came into force: “Bookings are strong, it’s a matter if they hold,” says Ms Moynihan.

Meanwhile, there are other challenges. Killarney has the longest tourist season in Kerry, helped by the successful Christmas in Killarney festival, major events each weekend at the Inec concert venue, and an increasing role as a wedding destination.

However, many premises close between October and March. Others stay open only at weekends. “It’s very hard to hold on to staff if you are not open 52 weeks a year,” says Tom Randles.

Housing costs do not help. Some hotels are doing things for themselves. The Hotel Europe is spending €3 million to contruct housing for 40 staff in student-style blocks. It always provided some accommodation, but more had to be done to hold on to high-quality staff, its manager Michael Brennan says.