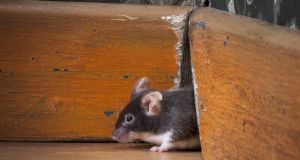 A “juvenile rodent” had been seen in the dining area and main kitchen at Casement Aerodrome earlier in the month. File photograph: Eric Isselée

The Air Corps officers’ mess at Casement Aerodrome in Baldonnel was among nine food premises served with closure orders last month after health inspectors found evidence of rodents in the kitchen.

During an inspection on December 12th last, the environmental health officers found there was a failure to have adequate procedures in place to control pests. A commercial pest control company reported mouse activity in the kitchen wash-up area and a “juvenile rodent” had been seen in the dining area and main kitchen earlier in the month.

The inspectors also found an unsealed, six-inch sewer pipe running under the conservatory.

Nine closure orders were served on food businesses last month, the Food Safety Authority of Ireland (FSAI) said on Tuesday. They included one served on the male medical ward kitchen at Our Lady’s Hospital in Navan after a dead rodent was found trapped underneath a sink unit and fresh rodent droppings were found in a press.

The breaches of food safety legislation included raw sewage flowing through the back yard of King Kebab at 10 Costello Street, Irishtown, Athlone.

Field’s Bakery of Castletownshend Road, Skibberreen, Co Cork, was issued with a closure order after inspectors found evidence of mouse droppings on the premises.

The containers the cooked chicken was placed in were cardboard boxes previously used for the packaging of raw chicken.

Two large containers of cooked chicken were cooling down on the floor under the wash-up sinks and one of them was filled with water. The inspectors said the floor was “in a filthy condition” due to the accumulation of food debris and dirt.

Rodent bait was located close to a container of food.

Uncovered food was also stored in a cabinet refrigerator where “profuse black mould” was evident on the internal surfaces.

There was also mould on the inside lid and rim of several tubs of curry paste, the inspection report said.

In Collon, Co Louth, Fu Jing Chinese Takeaway was ordered to close after raw meat was seen being prepared in the designated vegetable preparation area, with raw chicken juices posing a grave and immediate danger to public health, the inspectors said.

The FSAI said 109 enforcement orders were served on food businesses for breaches in food safety legislation in 2018, an increase of 58 per cent compared with 2017 (69).

“The types of reasons cited for enforcement orders are simple errors that should not be happening in any food business,” she said.

“Non-compliance by food businesses will not be tolerated and all breaches of food safety legislation will be dealt with the full extent of the law.”

The businesses served with closure orders in December were: