‘It did not make much of a difference’: Dart commuters react to Peaktime.ie 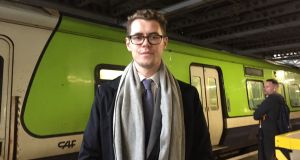 On Monday morning, Conor Ryan was one of the first to try Irish Rail’s new service, Peaktime.ie, to check for a less congested Dart as he made his daily journey from Dalkey to Pearse Street station.

“I saw that they were suggesting to travel off-peak because it has been . . . super busy the last few weeks . . . but I didn’t find it made that much difference,” said the 24-year-old. “This morning, I used one of the off-peak times but I found it still really busy.”

Travelling to work in the Department of Foreign Affairs at about 8am each morning, he described his commute as “uncomfortable”.

“You couldn’t read a newspaper or a book, even when you’re standing, because there’s just like not enough room . . . it’s really packed.”

Having some flexibility with his work times, he intends to “play around a bit” with the new service, through which Irish Rail seeks to get Dart commuters to stagger their rush-hour journeys in the face of overcrowding.

Zoe Carbery (27), who works as an after-school assistant in a school on Leeson Street, said staggering her commute is just “not an option” for her.

“I’d get the Dart at about 7.15am . . . if I was any later I’d be late for work,” she said of her journey from Raheny to Pearse Street station each day.

For a teacher who gave her name as B O’Connell (37), the fixed start time of her job means staggering her commute from Dún Laoghaire to Pearse Street is also not something she can consider.

“Some people have flexible hours, I don’t, so I have to be in about 8.50am at the latest,” she said. “Coming into winter as well, people don’t want to get up earlier . . . if I leave it any later than 8am, I won’t be in on time, especially if there’s any delay.”

“People have their routines, so if they want us to stagger the time that we get it, I think there should be more times available,” she said, noting that there are just four or five Darts available to her within an hour.

Board member Brendan Tuohy (64) commutes from Greystones to Dublin city centre and purposefully organises meetings to avoid rush-hour congestion: “Normally I’d never have a meeting before 10.30 in the morning . . . there’s nothing comfortable sitting in a squeezed carriage.”

“A lot of organisations have flexitime now . . . I think it’s a good idea, but you’ve got to follow up with the other issues,” he said of the new service.

“It’s very difficult then if you’re a parent dropping their kids to school – they’re not going to hang around for another hour or drop their kids at seven in the morning like.”

Mai Santamaria (40) is one such commuter navigating both the work and school run each morning, though she notes she has some flexibility in her start time.

Travelling from south Co Dublin each day to work in the Department of Finance, she said commuters staggering their trips will depend on employers getting on board.

“There’s no point in me wanting to get the train at 8.45am if no matter what, my office requests me to actually clock in at exactly 9am,” she said.

She added that commuters needed to be incentivised: “If someone said to me, you know, use the website and try to use the train before 8.30am every day and we’ll make your train ticket cheaper . . . it could be something as simple as a free family ticket a month.”