Latest Stormont House deal has a reasonable chance of succeeding 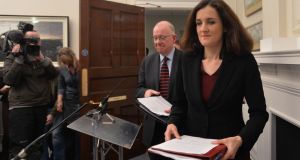 Listeners to BBC Radio Ulster’s Talkback programme were invited to suggest a name for yesterday’s Stormont House agreement. “Groundhog Day Deal,” was one suggestion. “The No Big Deal Deal,” was another. The “Deja Vu Agreement,” offered a veteran cameraman up at Stormont.

In the end, the British and Irish governments settled for the “Fresh Start: The Stormont House Agreement and Implementation Plan”.

A bit unwieldy, and “fresh start” appears to be rather pushing it. The public cynicism about the agreement was understandable. After all this was the third time in less than two years that Dublin and London and the North’s five main parties had concluded months of negotiations and put an agreement on the table.

There was the Richard Haass deal in Christmas 2013. Unionists said No to that. There was the Stormont House Agreement Mark I at Christmas last year. Sinn Féin and the SDLP said Yes at Christmas, but in March said No because they couldn’t live with welfare reform.

Perhaps after the Assembly elections in the North in May and the elections in the South which must happen by spring at the latest? The governments have to trust that Sinn Féin and the DUP, the primary actors here, will be prepared to pull together to make politics and Northern Ireland work.

Probably today on the chat shows North of the Border there will be particular emphasis on the negative, on the fact that there is virtually nothing in the 67-page agreement for victims and survivors of the Troubles.

Under the Stormont House Agreement of last Christmas an Historical Investigations Unit was to be created to inquire into killings during the Troubles. An Independent Commission on Information Retrieval to enable people to privately learn how their loved ones were killed also was to be established.

But an unbridgeable gap over what information would be disclosed by the British government in relation to state killings and alleged collusion with loyalist paramilitaries prevented - or perhaps put on hold - those badly-needed bodies being created. Sinn Féin and the SDLP expressed serious qualms about Britain citing “national security” concerns to prevent disclosure.

That will be hugely disappointing for victims. This is the fifth time since the Eames-Bradley proposals of 2009 that attempts to address the past have failed. The proposed bodies not only would have tested Britain’s willingness to tell the truth about the past but put the exact same challenge to the IRA and other republican and loyalist paramilitaries.

Theresa Villiers said the governments and the parties would continue to try to resolve this matter. So for victims and survivors we will just have to wait and see how good are the bona fides of the British government and Sinn Féin, the only party in the Executive with an alleged link to a paramilitary grouping.

Otherwise though this is a significant deal. There is meat in the document. It must be remembered that there was a real threat that devolution could have crashed over welfare reform and the fallout from the murder in August of Belfast republican Kevin McGuigan. That killing resulted in the assessment that the IRA was still in existence, that some of its members were implicated in the murder, and that the IRA army council was still operating.

That seriously spooked unionism, leading to Executive boycotts and a genuine potential for the DUP and the Ulster Unionists to quit the Executive.

In the document there are a number of measures to allay some of their concerns. For instance in a two-stage process the British and Irish governments will establish a four-person international body to monitor the paramilitaries. This is expected to be modelled on the Independent Monitoring Commission which previously adjudicated on whether or not the IRA and other paramilitaries were really going away.

Where paramilitarism was the big difficulty for unionists, welfare cuts were the bugbear for Sinn Féin and the SDLP - an issue that could have prompted one or both of them to exit the Executive.

Villiers held to her position that there would not be one penny extra from the British government to soften the effects of these cuts. However, it was agreed between the DUP and Sinn Féin that additional money will be found from Executive budgets to assist welfare recipients.

Under last year’s Stormont deal £564 million was to be allocated over six years to mitigate the effects of welfare reform. Now £585 million has been found for the same purpose but to be paid out over four years.

That didn’t meet Sinn Féin’s demands that safeguards should be in place well into the future. But it does mean that after four years there will be a British general election and perhaps the next Government will be more generous on welfare.

Dublin and London must now again trust that if, as seems likely, Southern parties make the allegation that the party is opposing austerity in the Republic and supporting it in the North that Gerry Dams and Mary Lou McDonald will respond with a robust “needs must” argument - that extra money was found for welfare and better to have a deal than to wreck Stormont.

The UUP, the SDLP and Alliance will be unhappy in different ways, and they probably will try to exploit the agreement to gain electoral advantage over Sinn Féin and the DUP in the forthcoming Assembly election.

But if Martin McGuinness and Peter Robinson and whoever succeeds him shortly - as seems likely - hold their nerve and respond with the glass half-full argument they should be able to cope with such sniping.

Perhaps this could be a case of third time lucky and this deal will hold.