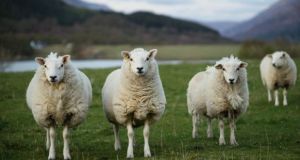 The ISPCA said pregnant ewes can be seriously injured in a panic to escape from chasing dogs. Photograph: iStock

There has been “a number of reports” of dogs killing or causing injuries to sheep and lambs in recent weeks, the Irish Society for the Prevention of Cruelty to Animals (ISPCA) has said.

The ISPCA has reminded dog owners to act responsibly and keep their pets under control when in the countryside or around livestock, as it is peak lambing season.

“Dog owners must keep their dogs under control at all times and can be held responsible for attacks on sheep which can have serious financial and legal consequences,” said Andrew Kelly, chief executive of the ISPCA.

“This can be a hugely stressful time for sheep farmers trying to protect their flock and they can often experience horrific dog attacks, causing damage to their sheep, pregnant ewes and lambs during lambing season, from January through to Spring.

“Even the most docile, well-behaved dogs’ natural instinct is to chase, which can result in them taking part in pack behaviour.”

Mr Kelly said pregnant ewes can be seriously injured in a panic to escape from chasing dogs, “often miscarrying their lambs, which is devastating for farmers”.

“Allowing a dog to roam is not only irresponsible but it is also an offence not to have your dog under effective control and local authorities are enforcing the Control of Dog’s Act,” he added.

The ISPCA has also reminded dog owners that it is a legal requirement to have all dogs microchipped. Puppies must be microchipped by the time they are 12 weeks old or before they leave the breeding premises. Owners must also be in possession of s microchip certificate.

Regional TDs offered ‘group or individual deals’ to back coalition