Is a general election a good idea? What TDs are saying 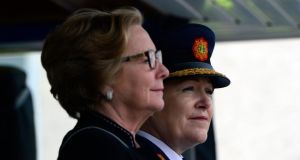 General election: Fianna Fáil claims Frances Fitzgerald (left), who was minister for justice between 2014 and 2016, was aware of a campaign by the legal team of the former Garda commissioner Nóirín O’Sullivan (right) to undermine the whistleblower Sgt Maurice McCabe. Photograph: Cyril Byrne

Ireland is facing a general election within the next month after Fianna Fáil tabled a no-confidence motion in the Tánaiste.

It alleges that Frances Fitzgerald, who was minister for justice between 2014 and 2016, was aware of a campaign by the legal team of the former Garda commissioner Nóirín O’Sullivan to undermine the whistleblower Sgt Maurice McCabe at the O’Higgins commission, which was established in 2015 to look into the sergeant’s claims of corruption and malpractice.

Although Fine Gael and Fianna Fáil agree a poll should be held as soon as possible, Fine Gael TDs back the Taoiseach in his belief that Ms Fitzgerald has no reason to resign, while their Fianna Fáil opponents are pressing for her to step down or face a general election.

Sinn Féin, Louth
LMFM tweeted Sinn Féin’s outgoing president as saying: “Should a general election go ahead Sinn Féin will be running two candidates in Louth in a bid to retain our current seats and we will run on our record in the area.” He also said the Government’s handling of the Maurice McCabe issue highlighted its incompetence and how far removed it was from the public’s view of the issue. Mr Adams also tweeted that he hadn’t gone away: “In their rush to write my political obituary some in the media have concluded that I’m now to retire. Well they’re wrong. Bogside republicans don’t retire. Neither do Ballymurphy republicans.”

Fine Gael, Meath East
The Minister for Social Protection told Shannonside radio that politicians needed to “cop on” and “sort this mess out” before there was a general election. Nobody wanted to go to the polls, she said.

Labour, Longford-Westmeath
The chairman of the parliamentary Labour party told Shannonside radio that the general election will be caused by people whose “egos appear to be larger than their intellect”.

Sinn Féin, Kerry
The Sinn Féin TD told Radio Kerry that his party tabled its motion of no-confidence in Frances Fitzgerald as it believed her position to be untenable. He said that one solution was for the Tánaiste to step down.

Independent, Kerry
The Independent deputy told Radio Kerry that Fine Gael and Fianna Fail were like two children fighting over a toy and that the email controversy didn’t seem a good enough reason for an election. He added that the electorate didn’t want an election in the run-up to Christmas and that he agreed with political analysts that an election would not radically change the make-up of the Dáil.

Independent, Kerry
The TD told Radio Kerry that his phone was “like a Christmas tree, lighting up since last night with people telling him they don’t want an election”. He said the government had questions to answer but this was a “stupid reason to have an election that will cost the taxpayer ¤40 million” in the middle of delicate Brexit negotiations.

Fianna Fáil, Meath West
LMFM tweeted the Fianna Fáil TD as saying: “There are three or four days for people to talk and discuss things, so it’s pre-emptive to take it as a foregone conclusion that an election is definitely on the cards.”

Fine Gael, Monaghan
Northern Sound reported that Minister for Culture, Heritage and the Gaeltacht Heather Humphreys believed it was unfair to make the Irish people face a general election when the Tánaiste had “done nothing wrong”. Speaking in Cavan on Friday morning, she said that although she and her party would be ready if faced with a winter election, it was the wrong time to do it.

Fianna Fáil, Mayo
The Mayo deputy Dara Calleary told Midwest Radio on Friday morning that a general election is not inevitable but that his party has no confidence in Tánaiste Frances Fitzgerald.

Fianna Fáil, Cork North-Central
The Cork TD told The Neil Prendeville Show, on RedFM, that Fianna Fáil has an obligation to hold the Government to account.

Fine Gael, Clare
The Clare deputy Joe Carey admitted to Clare.fm that the Government was effectively gone and accused Sinn Féin and Fianna Fáil of “wreckless politics” at a time when the country was on the brink of Brexit. He said his party’s confidence-and-supply agreement with Fianna Fáil is in “absolute jeopardy” and that an election is likely.

Fianna Fáil, Clare
Clare’s Fianna Fáil TD disagrees with Mr Carey, telling Clare.fm that the ball is in Leo Varadkar’s court. He says an election can be avoided if Frances Fitzgerald is removed from office. Mr Dooley’s former constituency colleague Tony Killeen predicted that the Tánaiste would step down in the coming days. The former Labour TD Michael McNamara, who lost his Oireachtas seat in the 2016 general election, said that an election was not far off but that a pre-Christmas election seemed unlikely.

Fine Gael, Longford-Westmeath
The Fine Gael deputy Peter Burke, speaking on Midlands 103, warned that Opposition parties would pay a heavy price for forcing an election. He said it was “not proportionate” to force Ms Fitzgerald to resign over her handling of the Maurice McCabe email.

Fianna Fáil, Offaly
The Offaly TD told Midlands 103 that the threat of a general election will test the Taoiseach’s mettle. Barry Cowen said Leo Varadkar had the power to ensure the country didn’t have to go to the polls.

Fianna Fáil, Kildare North
The Fianna Fáil deputy told Kildare FM that it was not just about one email and that there was dysfunction at the heart of Government.

Fine Gael, Carlow-Kilkenny
The Carlow-Kilkenny TD told KCLR that the Tánaiste had explained herself satisfactorily and didn’t think she had any reason to resign. He also told the station that nobody wanted a general election around Christmas – and that a lot could happen between now and next week’s no-confidence vote.