Martin accuses Taoiseach of refusing to engage on Fitzgerald’s position

Minister for Finance Paschal Donohoe says Fianna Fáil are attempting to advance their own political agenda by lodging a motion of no confidence in Tanaiste Frances Fitzgerald. 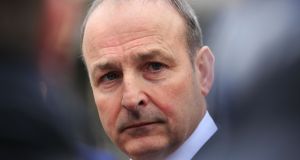 Fianna Fáil leader Micheál Martin has accused the Taoiseach of refusing to engage with him in recent days on Tánaiste Frances Fitzgerald’s position.

Mr Martin has said his “patience has been stretched” after he went to Mr Varadkar quietly last Wednesday to explain Fianna Fáil’s problem with what was happening.

“He didn’t even engage. I had to take the initiative the next day,” Mr Martin said.

The Fianna Fáil leader’s comments come as the Government finds itself in crisis after both Sinn Féin and Fianna Fáil have tabled a motion of no confidence in Tánaiste Frances Fitzgerald.

The crisis centres around allegations from Opposition parties that Ms Fitzgerald was aware of a campaign by former Garda commissioner Nóirín O’Sullivan’s legal team to undermine Garda whistleblower Sgt Maurice McCabe at the O’Higgins commission.

A general election now looms as the confidence and supply agreement between the main parties has been broken.

Speaking on RTÉ’s Sean O’Rourke Show, Mr Martin said the fundamental issue was that the Government was complicit in the legal strategy to discredit Garda whistleblower Maurice McCabe.

Mr Martin said that he had “no difficulty meeting the Taoiseach,” but added “he knows our position”.

He asked why an agent of the State was pursuing such a strategy against a man when they knew the charges were bogus.

Why did legal representatives of the Department of Justice not object to that strategy, he asked.

“This is an enormous issue. This is not about Micheál Martin. It’s something that is at the core to every citizen of this country.

“The Department of Justice should have objected to that line,” Mr Martin said.

Mr Martin said that the McCabes had been told they would be offered the highest level of legal protection but that they had felt they were on trial.

He said he had a deep unease that documents Gsoc wanted had gone missing.

He added he was worried about the obfuscation and the lack of “honest answers” to Alan Kelly’s questions.

“The Tánaiste should step aside, that would avoid a general election,” Mr Martin said.

“This can be avoided if the Government takes action.”

Seperately, an angry Paschal Donohoe has said he has had enough of the “Fianna Fáil locker room” and accused the party of putting its own interests ahead of the country.

The Minister for Finance made an impassioned defence of Tánaiste Frances Fitzgerald on his way to launching an employment initiative for the long term unemployed and refugees.

She had set up the policing authority and a legal framework to allow to drive reform in the Garda.

“For people like Fianna Fáil to make the charge that Frances Fitzgerald or this government has been complicit in trying to undermine or challenge the work of brave people like Maurice McCabe shows the level to which they are now sinking to advance their own political agenda,” he said.

‘A case built on sand’

However, he did say if Fianna Fáil supported a no confidence motion against Tánaiste Frances Fitzgerald there would have to be one.

Such a motion would be incompatible with their confidence and supply commitment to the Government.

Mr Coveney was speaking to journalists in Brussels on his way in to the EU’s Eastern Partnership summit. Later he met the EU’s chief Brexit negotiator Michel Barnier.

The minister said he believed that progress on the Border was “doable” ahead of the December summit – for that we have to have “answers and parameters” that were “more than aspirational” for a roadmap that would point the way to how a frictionless Border could be safeguarded.

It would be difficult to see how that could be done if there was “regulatory divergence on the island of Ireland, ” he said.

In defence of the Tánaiste, Mr Coveney insisted that “this is about politics and Fianna Fáil trying to damage the Government at a time that is not in the national interest,” ahead of a crucial EU summit at which Ireland’s Border would be a central issue.

“If there were sound reasons to do that, it would be one thing,” he said but the issues facing Ms Fitzgerald were matters before a tribunal .

Fianna Fáil were being led by “ Sinn Féin-style politics” of presuming guilt before it had been proven.

Mr Calleary said the party did not want an election and there was “a long way to go” before Tuesday’s proposed vote.

“We don’t feel there is a need for a general election on this issue. What we don’t have is confidence in the Tánaiste’s ability.

He said he had great regard personally and professionally for the Tánaiste, but he was seeking answers and she had failed in her duty.

“She gave Maurice McCabe a commitment – she didn’t follow through.”

Mr Calleary denied that Fianna Fáil was breaching the confidence and supply agreement. “The confidence part has been eroded.

“There comes a time when supply depends on confidence.”