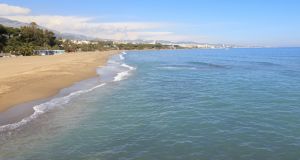 Stock photo of a beach in Malaga. The woman was immediately taken from the water but medical teams were unable to revive her. Photograph: iStock

A 69-year-old Irish woman has died after she was recovered from the water at a beach in Malaga in Spain on Wednesday.

It is understood the woman who was on holiday at Las Gaviotas beach in Benalmadena on the Costa del Sol, suffered a heart attack around midday, while swimming.

She was immediately taken from the water but medical teams were unable to revive her and she was pronounced dead at the scene.

Police in Malaga police confirmed they had launched an investigation into the death of the Irish tourist while on the beach in Benalmadena.

The Department of Foreign Affairs has said it has not been contacted but “stands ready” to offer consular assistance if requested.

Las Gaviotas is a popular holiday destination on Spain’s south coast located less than 5km from Torremolinos and around 25km from Malaga.

1 Large crowds gather on Dublin’s Grafton Street on eve of lockdown
2 200 Irish retailers for all your online Christmas shopping
3 Coronavirus: Three further deaths and 1,066 cases reported in Republic
4 Galway nursing home sees 26 out of 28 residents test positive for Covid-19
5 Life under Level 5: Where can I go, who can I see, what is closed and what is open?
Real news has value SUBSCRIBE