Motorists will not need ‘green cards’ to cross Border post-Brexit 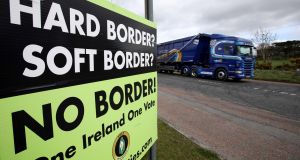 UK-registered vehicles will still need to apply for green cards to travel in Ireland or other EU countries. Photograph: Paul Faith/AFP/Getty Images

Irish motorists will no longer need “green cards” to cross the Border in the event of a no-deal Brexit thanks to an agreement between transport authorities in the UK and the Republic.

There had been a scramble to issue green cards to up to one million Irish drivers ahead of Britain’s initial deadline to leave the EU in March, which was postponed to October 31st.

The green cards, an internationally recognised motor insurance document, are issued by the Motor Insurers’ Bureau of Ireland (MIBI) to insurance companies and brokers, who then may supply or offer them to policyholders.

There was a rush to secure the insurance cards amid fears Irish-registered vehicles would not be permitted to travel to Northern Ireland without them, if Britain crashed out of the EU without a deal.

Following negotiations with the MIBI, the UK department of transport has now agreed to accept valid Irish insurance discs as proof of cover in Britain, in a no-deal scenario. However, motorists with UK-registered vehicles will still require green cards to travel in Ireland, and the rest of the EU.

The MIBI issued approximately one million green cards to insurers ahead of the previous Brexit deadline last March, but the organisation does not collect figures on how many motorists had availed of the cards.

David Fitzgerald, MIBI chief executive, described the development as “really positive news, which should come as a relief to anyone who needs to travel to the UK, including Northern Ireland.

“Thankfully, the UK has now confirmed that valid insurance discs meet the requirements set out in UK legislation and so can be used as proof of motor insurance cover in the UK… This should make insurance recognition much simpler for those travelling to the UK, including Northern Ireland,” Mr Fitzgerald said.

UK-registered vehicles will still need to apply for green cards to travel in Ireland, or other EU countries, as Britain would no longer be part of the EU Motor Insurance Directive, post-Brexit.

The directive allows motorists travel freely between EU countries, without the need for additional insurance documentation.

Ireland is subject to the collective EU position on the directive, and so could not unilaterally give UK-registered vehicles an exemption to travel in the country without a green card. UK motorists travelling without the card in the Republic, or the rest of the EU, could be treated as an uninsured driver, and face penalties.

Britain is set to leave the EU on October 31st, with current negotiations for a deal at an impasse, over the British government’s demands the backstop clause to prevent any return to a hard border in Ireland be scrapped.

Mr Fitzgerald said there had been “a lot of concern” from motorists earlier this year over the green card issue, in the weeks leading up to the initial Brexit cliff edge.

“Suddenly drivers were faced with a new requirement for green cards in light of the UK’s potential exit from the European Union without an agreement. At that time the clear position was that if there was a no-deal Brexit then green cards would be required for all Irish registered vehicles travelling to the UK, including Northern Ireland,” he said.