Two charged with fatal shooting of Malcolm McKeown in Co Down 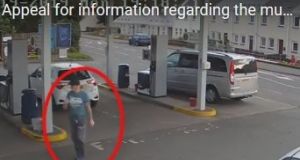 A screengrab from a video provided by the PSNI showing Malcolm McKeown circled as he enters the garage. Image: PSNI/Youtube

Two men have been charged with the murder of Malcolm McKeown who was shot dead in his car in Co Down on Monday.

Mr McKeown (54) was found dead in his car at a petrol station in Waringstown on Monday evening.

Detectives arrested two men, aged 24 and 25, on Saturday morning and on Sunday a PSNI spokesman said these men had been charged with the murder of Mr McKeown.

They are set to appear at Lisburn Magistrates’ Court on Monday.

The arrests came on the same day that Mr McKeown was laid to rest following a funeral at Emmanuel Church in Lurgan.

Detective Chief Inspector Peter Montgomery has also reissued an appeal for information about the murder. “CCTV footage shows Mr McKeown entering the shop at Dewart’s Garage at approximately 7.15pm on Monday and then walking back to his car approximately four minutes later.

“It was around this time I believe that the gunman or gunmen shot him,” he said. “Were you in Dewart’s Garage or in Waringstown Main Street at that time and did you see anything? “I am keen to trace the driver and passengers of a dark blue or black VW Passat, registration RK62 PLX, which was seen at 6.20pm in Cambrai Heights before the shooting.

“I believe the gunman or men may have got out of this car, walked around the back of Dewart’s to shoot Malcolm McKeown, before fleeing and leaving Cambrai Heights in the car at 7.20pm.

“Did you see this car leaving Cambrai Heights and then travelling along the Dunkirk Road towards Summerhill Road at 7.20pm?

“If you were driving in these areas and have dashcam I would like to see it. “If you live in Cambrai Heights or the adjoining streets and have private CCTV please let me know. “This car was found burnt out on Glenavon Lane in Lurgan just after 7.30pm.

“Did you see the occupants get out of it and get into a dark-coloured Jeep? If so, do you know where they went? Or did they make off on foot? “I would also like to hear from anyone who saw Mr McKeown at any stage during Monday in Lurgan or Craigavon. ”

Detectives are urging anyone with information to contact them.