Authority to begin winding down refunds after 95% of cheques issued 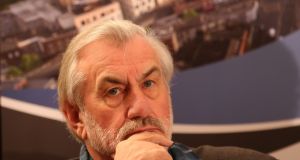 Kieran Mulvey: renewed appeals to donate refunds to homeless charities were made by the chairman of the Refund Project oversight group over the Christmas period

Donations of Irish Water refunds to homeless charities has reached more than €850,000 as almost all households have received cheques.

The Refund Project was set up on behalf of the Simon Community, the Peter McVerry Trust and Focus Ireland. The Refund Project said most of the donations have been happening through its online platform, refundproject.ie.

Irish Water said it was beginning to wind down the domestic refunds process as 95 per cent of cheques had been issued to customers since late November.

Renewed appeals were made by Kieran Mulvey, chairman of the Refund Project oversight group, over the Christmas period.

“This is a national crisis in every sense of the word. Every donation small or large will greatly assist the advancement of homeless projects being developed by the three charities,” Mr Mulvey said.

Over the coming weeks Irish Water will make a final appeal to customers who have yet to receive their refund to update their details either via the online portal or by phone.

Eamon Gallen, head of customer operations for Irish Water, said the response of customers to appeals to update their details has been “considerable”.

“Our refunds page on the Irish Water website had almost half a million hits, our call centre dealt with over 90,000 calls and over 90 per cent of those were to update personal or account details.

“While the response from the public has been considerable, we still do have outstanding accounts where incomplete addresses or accounts registered, for example as ‘the occupier’, meaning that we cannot issue the cheque which must go to a named account holder.”

Anyone yet to receive a cheque from Irish Water for the refund of their domestic water charges should contact 1850 448 448. Correspondence addresses can also be checked and updated at www.water.ie/for-home/refunds/