EU and UK will both ‘end up poorer’ following Brexit 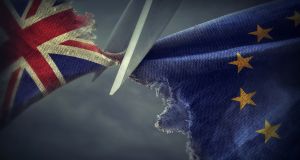 Prof Gavin Barrett said it was clear from the UK perspective that its priority was not trade as it was “getting out of the best international trade deal in the entire world”. Photograph: iStock

Both the European Union and the United Kingdom will end up with less wealth following Brexit, according to a leading Irish expert on European law.

Prof Gavin Barrett, Jean Monnet Professor of European Constitutional and Economic Law at the Sutherland School at UCD, told the Killarney Economic Conference that both the UK and the EU had very different priorities to economic concerns in their negotiations.

He also said the Brexit negotiations are unique in terms of international trade deals, “in that neither party has economic gain as their primary aim”.

“It’s pretty clear that both sides are going to end up poorer because trade is going to be negatively affected and less trade means less wealth,” he said.

Prof Barrett said that it was clear from the UK perspective that its priority was not trade as it was “getting out of the best international trade deal in the entire world” but its priorities were instead reducing migration, increasing trade with non-EU countries and increasing sovereignty.

But he believed that as a consequence, the UK does not have the same power to get better trade deals than the EU and he expected the UK to have to “start running just to stand still” and it will have to strike a hard bargain to match the trade deals the EU gets during its transition period to exit.

He said that the £350 million (€394 million) a week figure that pro-Brexit campaigners said the UK would save by exiting the EU was always a fictional figure, but whatever the UK did pay, the EU was simply “an entry fee to the lucrative single market”.

The best way to ensure the “least worst” Brexit was a new customs partnership that would lead to a trade relationship between the UK and the EU that was effectively borderless and free from both tariff and nontariff barriers in both goods and services, John McGrane, director general of the British Irish Chamber of Commerce, said.

Such a deal may be difficult to obtain from the EU but it would deliver effective regulatory equivalence and mutual recognition of qualifications and standards, he pointed out.

Introducing the British Irish Chamber of Commerce’s Big Principles Initiative to address the problems caused by Brexit, Mr McGrane said his was the only organisation with a mission to speak for the interests of business on both islands.

He pointed out that trade between Britain and Ireland was worth almost €70 billion a year and supported more than 400,000 jobs across both islands, so any bad outcome to the Brexit talks on the UK’s future relationship with the EU would result in a bad outcome for Ireland.

“The ESRI has shown a fall of 1 per cent in UK GDP – and it will be about the economy, stupid, when all is said and done – correlates to a 0.3 per cent fall in Irish GDP, not to mention a near-existential threat to areas of key exposure such as our food and agribusiness and parts of our tourism industry as well.”

Mr McGrane said that the British and Irish Chamber respected the democratically expressed wish of the UK people to leave the EU, so its focus was on producing practical, implementable solutions to bring about the “least worst” type of Brexit rather than just wishing it won’t happen.