Navan girl, who died after contracting meningitis, ‘will be greatly missed by all’, principal says 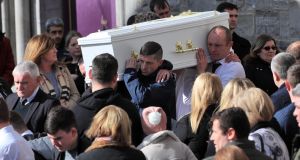 Kayla Carey’s coffin is carried from St Mary’s Church in Navan after her funeral Mass on Tuesday. Photograph: Colin Keegan/Collins.

Kayla Carey, a six-year-old from Co Meath who died after contracting meningitis, was a sensitive and loving person who would never like to see her classmates get in trouble, her funeral Mass has heard.

Fr Kevin Heery told the congregation at St Mary’s Church in Navan that Kayla “enjoyed being a young girl and wanted to stay small forever” and it “breaks our hearts that her little aspiration came true”.

He said she was quiet when in class at Scoil Mhuire in the town but chatted away happily when on her own.

He said Kayla’s sudden death last Thursday had generated a huge sense of shock and grief the community and that many of those present had gathered to seek comfort, assurances, and some measure of peace and hope.

Members of the Scoil Mhuire school choir sang ‘Somewhere Over the Rainbow’ as Kayla’s parents, Geraldine and Martin, and family, accompanied her small white coffin into the church. A photograph of the girl smiling was placed beside a bouquet of flowers and a green bunny on the altar.

Fr Heery said children in Kayla’s class in Scoil Mhuire liked nothing better than to quieten down for their daily storytelling with arms folded and books pushed away into the centre of the desk.

He said children love stories, and Kayla especially loved those involving unicorns, but that her own chapters, which were full of life, happiness and love, had been cut far too short.

The priest extended prayers and sympathies to Kayla’s parents, her sister Faith and brother Brooklyn, grandparents, extended family and all “who knew and loved this special little girl”.

He also remembered Kayla’s cousin, Jasmine O’Connor (10), who remains seriously ill with meningococcal meningitis in Temple Street Hospital, which is where Kayla died.

Symbols of Kayla’s life were presented at the end of the ceremony including a unicorn, a Mancester United jersey, a pair of Wellington boots and a family photograph.

Pupils from fourth, fifth and sixth classes of Scoil Mhuire formed a guard of honour as the funeral cortege passed by the school before Kayla was buried in St Finian’s Cemetery.

Scoil Mhuire principal Colm Devlin said: “This is a terrible tragedy for her family, our school and the whole community. We are deeply saddened by this turn of events. Our sympathy and thoughts are with Kayla’s family and friends. Kayla is a senior infant pupil here and she will be greatly missed by all who knew her.”

Mr Devlin confirmed that the school has implemented its critical incident management plan, and that psychologists from the National Educational Psychological Service were supporting and advising teachers in assisting the students.