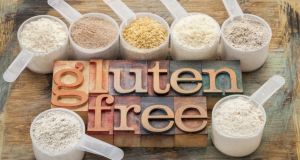 “There is a lot of noise around the topic, whether it is from celebrity advocates such as Gwyneth Paltrow and Novak Djokovic, or chefs, nutritionists and bloggers.” Photograph: iStock

People in Ireland are wasting tens of millions of euro each year on high-priced gluten-free products that do little or nothing to improve their health, a doctor has said.

Irish residents increased their spend on gluten-free food by €25 million over the past 12 months, and one in five consumers now regularly buys such products, despite the fact only 1 per cent of the population have coeliac disease, according to Bord Bia research published on Wednesday.

The research described gluten-free food as mainstream and said the market was worth about €66 million, a jump of 36 per cent in just one year.

Almost 80 per cent of those who told Bord Bia researchers they follow a gluten-free diet are not diagnosed as coeliac, while 38 per cent do not have any intolerance to wheat at all. They have adopted a gluten-free diet because they believe it to be a healthier lifestyle choice.

“We are all susceptible to the power of mass marketing and ultimately that is what this is, it is just a fad,” said Prof Fergus Shanahan, chair of the department of medicine at University College Cork. “I know people might say who is this arrogant doctor to dismiss a gluten-free diet as a fad, but for the vast majority of people, that is exactly what it is.”

Prof Shanahan is also director of the APC Microbiome Institute at UCC, an organisation with world standing in the study of how bacteria in the human gut can influence biological activity.

“All of the studies show that around 1 per cent of us are coeliac. That is a fact. A lot of people who take gluten-free products do so because of celebrity endorsements. But they are not being consistent and might buy gluten-free bread and then eat a whole range of other products that contain gluten.”

He said many people who claim to feel the benefits of a such a diet are merely benefiting from the placebo effect. “You will typically see around 30 per cent of people reporting an improvement purely because of the placebo effect. In some bowel conditions that can rise to as much as 70 per cent.”

Bord Bia’s research found many respondents said a desire for a healthy lifestyle was a key driver of their switch to gluten-free, although many were unable to articulate what gluten was.

“There is a lot of noise around the topic, whether it is from celebrity advocates such as Gwyneth Paltrow and Novak Djokovic, or chefs, nutritionists and bloggers,” said Paula Donoghue, Bord Bia’s consumer insight manager.

“Consumers have high expectations around quality, so we recommend that companies work towards positioning products and brands that are natural and taste great but just happen to be gluten-free. Bread is the barometer product for gluten-free as fresh bread is the product they miss most.”

The research included interviews with key influencers, a nationally representative online survey, face-to-face interviews with 15 consumers of gluten-free products and analysis of existing reports and information.

Larger retail stores to reopen on Monday ahead of schedule 16:14
Covid-19 having ‘profound’ emotional impact on older people in Northern Ireland 15:49
Breach in EU ammonia limits needs ‘urgent’ attention, says EPA 15:34
Church of England distances itself from Irish language ruling on gravestone 15:24
Sunniest spring on record in Dublin with rainfall 70% below average 14:26

1 Donald Trump is in trouble, and that could spell very bad news
2 Larger retail stores to reopen on Monday ahead of schedule
3 Taoiseach says €350 pandemic payment to be cut for some part-time workers
4 O’Doherty and Waters ordered to pay legal costs of case against State over Covid-19 laws
5 Madeleine McCann case: ‘We assume the girl is dead’, German prosecutors say
Real news has value SUBSCRIBE