Irish people should not stereotype the British, says President 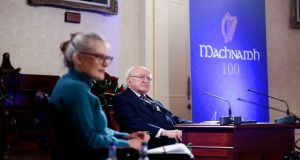 President Michael D Higgins hosting the first in a series of Machnamh 100 seminars at Áras an Uachtaráin. Photograph: Maxwells

Irish republicans during the War of Independence were capable of reprisals and atrocities, and the British forces were not alone in this, President Michael D Higgins has said.

In an address to launch the Machnamh 100 centenary commemorations address, Mr Higgins said: “Of course, the British forces were not alone when it came to reprisals and atrocities. Violence breeds violence.

“Cruelty is learned and, indeed, the history of Irish republicanism is one in which the callous disregard for human life has been displayed on too many occasions, with civilians often constituting the target, in what is often termed the ‘Irish struggle’,” he said.

“War is always ugly, and posthumous glorification is neither desirable nor morally sound,” he said, in remarks that come just days after Sinn Féin TD Brian Stanley’s remarks about the 1979 Warrenpoint attack.

People should engage with history and commemoration in “an inclusive, ethical, pluralist and honest” way, that evaluates the motives and of actions “on all sides with fairness”.

Finding “a fair and comprehensive way of dealing with the past” is a daunting challenge, he said. “However, it is a challenge that on moral grounds cannot be, should not be, I believe, shirked.”

However, it is the basis for a new future “not only of hope”, but of “fulfilment for all on our island and for all in our neighbourhood”, he said. “For the sake of the future, we must break loose from the snares of the past.”

Meanwhile, the President said that Irish people, the subject of stereotyping for so long, should not stereotype British people because a majority of Irish people disagree with Brexit.

Efforts to generate Anglophobia are perhaps being fuelled by the worst aspects, and feared consequences, of Brexit, Mr Higgins said in his address to open the Machnamh series of talks.

In the lecture series – the word Machnamh means to reflect or meditate – the President has drawn together historians to discuss how events of 100 years ago have shaped modern Ireland.

During the address, he suggested attacks on creameries and shops in rural Ireland during the War of Independence were a “key strategic tool” of the British government.

Attacks by Auxiliaries and Black and Tans were not merely a spontaneous series of acts by the uncontrolled, or the drunken, but rather a deliberate response by empire to “quash support” for independence.

The sophisticated reprisals “marked an escalation” in the economic damage wrought during the conflict by punishing population through the destruction of a “cherished” local employer.

Reprisals and collective punishments were an established strategic tool of imperialist military strategy by the time before they occurred in Ireland during the War of Independence.

Such acts, and the anticipation of them, drew a violent response in turn from Irish nationalists who were “motivated by both new and recalled humiliations of which there was no shortage”.

The President’s lecture will be responded to by Prof Ciarán Benson, the chairman of Poetry Ireland and the Irish Museums Trust; Prof Anne Dolan of Trinity College Dublin; Prof Michael Laffan, emeritus professor of history in UCD; and Prof Joep Leerssen, professor of European studies at the University of Amsterdam.

It will be followed in February by a seminar entitled Empire: Instincts, Interests and Power that will examine British responses to events in Ireland during the War of Independence and the treaty.

4 Sturgeon ups the ante with promise on independence vote