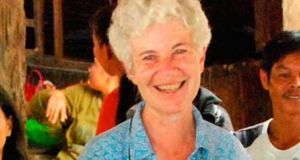 Sister Kathleen Melia was gagged and repeatedly punched in the face and chest.

An Irish missionary nun who was savagely beaten in an attack on a remote island in the southern Philippines at the beginning of March has arrived in Manila and is awaiting urgent surgery after an arduous five-day journey by land and sea and a frantic search for blood donors.

Columban Sister Kathleen Melia was closing the windows at her convent at the San Jose Parish Church in the remote region of Midsalip on March 1st when she was attacked by a masked man.

She was gagged and repeatedly punched in the face and chest. The attacker then fled the scene leaving the 70-year-old nun, who is from Mohill, Co Leitrim and has been working as a missionary in the Philippines for more than 30 years, unconscious and gagged.

When she came round she was able to raise the alarm and was treated in the town before enduring a two-hour van journey through the mountainous region to a local hospital where x-rays revealed she had a broken femur, which required surgery.

An immediate complication arose as a result of the nun’s B Negative blood type. Less than 1 per cent of the Filipino population share her blood and the hospital had no supplies available.

A frantic search among the local community led by Columban missionaries eventually yielded sufficient supplies for surgery to take place but the complexity of the procedure meant the missionary nun had to be transferred to the Filipino capital Manila for a follow-up procedure.

No planes servicing the remote region where the nun has been working for more than three decades were able to accommodate her stretcher so she had to wait three days for a boat and then embark - in the company of a registered nurse and a fellow missionary - on a two-and-a-half day journey across rough seas to Manila where a fresh search for donor blood began.

The missionary community have managed to find four donors and the surgery has been scheduled place on March 14th.

No arrests have been made but sources close to the missionary community in region have linked the attack to mining in the region.

For many years Sister Kathleen has been working with the Subaanen tribal people helping them in their ongoing fight against companies engaged in large-scale mining, which the tribes fear will destroy their way of life.

She has worked at translating documents and preparing legal papers for the tribes as well as developing feeding, agricultural and education programmes for the local community which has been ravaged by widespread deforestation ahead of the removal by overseas companies of gold and other resources.

“We don’t know who was behind the attack but the ones that stand to gain most from it are people connected with mining industry,” one source familiar with the region told The Irish Times. “We don’t know who else would do such a thing.”

4:22 Coveney’s London talks on NI riots expected to go ahead this week

Coveney’s London talks on NI riots expected to go ahead this week 19:14
Rush for flights into State from countries set for quarantine list 19:06
Covid-19: Minister seeks ‘solidarity tax’ on high earners and firms ‘highly profitable’ in pandemic 18:32
Philomena Lee among five given leave to challenge mother and baby homes report 18:18
Coronavirus: 394 new cases and no further deaths reported in the State 17:52