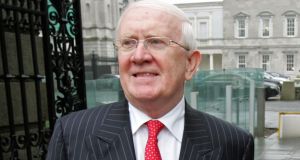 Irish MEP Pat the Cope Gallagher has called on the European Commission to implement sanction measures against Iceland, saying that Iceland and the Faroe Islands have been fishing mackerel in the North East Atlantic in an “indiscriminate and reckless manner.”

Speaking at the European Parliament, Mr Gallagher announced that a 5-year agreement had been signed on Wednesday evening between the European Union, Norway and the Faroe Islands concerning the sharing of mackerel in the North East Atlantic. Iceland refused to co-operate and withdrew from the talks.

The mackerel row has been ongoing since 2009 when Iceland claimed there had been a mackerel migration shift in its favour.

However, Mr Gallagher criticised Fisheries Commissioner Maria Damanaki for handling the issue in a “disappointing” manner.

“I have no doubt, if she (Ms Damanaki) had imposed sanctions against Iceland last year then we wouldn’t be in the situation we face today, whereby Iceland once again refuses to co-operate with the other Coastal States.”

Iceland has increased its share of mackerel catches from 1 per cent in 2006 to 23 per cent in 2013, while the Faroe Islands share has grown from 4.6 per cent to 29.3 per cent in the same time period. Mr Gallagher, who presented his report to the parliament on the issue in 2012, called for a “long-term solution” to ensure the sustainability of mackerel stock and the protection and socio economic interest of the fishing and processing sectors.

“Both Iceland and the Faroe Islands were previously responsible for the overfishing of blue whiting in the North East Atlantic, resulting in a collapse in this stock,” said Mr Gallagher. “The case of blue whiting clearly shows what can happen, if no action is taken.”

EU Budget Commissioner Janusz Lewandowski agreed that Iceland’s refusal to sign the deal was “disappointing”, saying he would take into account calls from MEPs for sanctions.

Swedish MEP Isabella Lovin reminded the parliament that all nations must support one another as the impact of climate change becomes a reality. “Climate change is for real and the mackerel war is the first real example of the conflict of resources of which were going to see more and more,” she said.