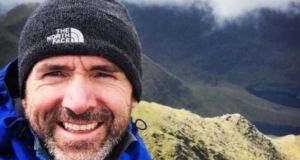 Irish climber Seamus Lawless fell to his death on Mount Everest because of a freak wind, according to his friend and team leader Noel Hanna.

The 39-year-old Trinity College professor from Bray, Co Wicklow fell during his descent from the 8,848m summit on May 16th, in an area known as the balcony.

“Seamus was a very strong climber. He had been training for two to three years on different mountains. He had all the experience, he had all the knowledge and all the skills,” Mr Hanna told RTÉ radio’s Morning Ireland.

“He was 200m from camp, so you would think you were safe, but it was on blue ice. The winds started to pick up. The only thing I can think of is that he clipped off the rope and the wind caught him.”

Their climb had been perfect with no queues at the summit of the mountain, as have been seen in the past week. “We had 15 to 20 minutes on the summit, we took photos and then started to make our way down the mountain.”

Mr Hanna said Mr Lawless was the strongest of the three climbers in the group with him. It was decided that Mr Lawless would push on with the lead sherpa, while Mr Hanna assisted the two other climbers who were having problems with their oxygen masks.

“When we got back to camp, the sherpa told me that Seamus had fallen 200m from camp.”

A search began , but within a short time winds had picked up and it was too dangerous to go to the ledge from which Mr Lawless had fallen.

“We searched until dark that evening, unfortunately we couldn’t find anything,” Mr Hanna said.

When asked if he would keep climbing after the death of Mr Lawless, Mr Hanna said: “I’ve had friends killed in car accidents and that doesn’t make me think I won’t drive again.

“This was just a freak accident.”

Mr Lawless was an assistant professor in artificial intelligence at Trinity College’s School of Computer Science and Statistics. His body has not been recovered.

Two Irish climbers are among the 11 people who have died on Everest in the past month. Kevin Hynes (56), a father of two originally from the village of Newbridge, Co Galway, died on Friday as he was descending from the summit.