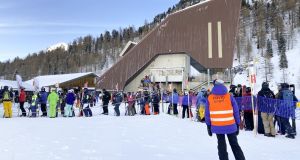 Skiers and snowboarders lining up in a queue at a ski lift in the Alpine resort of Verbier, Switzerland. Photograph: Sandra Hildebrandt/EPA

A 29-year-old Irish man has died following an avalanche at a ski resort in the Swiss Alps.

The man died after the avalanche at Col des Gentianes at Siviez near Nendaz on Monday. He was one of three skiers who left the marked slope at about 12.20pm on Monday, police said. The Irishman was subsequenly swept away, according to local police. Emergency services rescued the man and flew him by helicopter to hospital but he died from his injuries.

The Irish national was living in the Valais regio of Switzerland, police said . The public prosecutor has begun an investigation into the incident.

The Department of Foreign Affairs said it was aware of the incident and “stands ready to provide consular assistance”.

Seven people have died as a result of avalanches in recent days on the Swiss Alps. This includes a 38-year-old British man who was swept away from the slopes at the Verbier resort, to the east of Geneva on Monday morning.