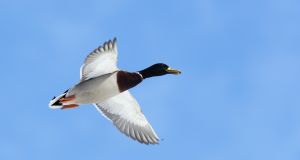 The common mallard has seen populations numbers decline by more than 40 per cent in 20 years, Birdwatch Ireland says.

Irish bird populations are in “dramatic” decline, with the loss of habitats decimating populations and putting the state’s biodiversity at risk, an Oireachtas committee will be told today.

Birdwatch Ireland will tell the Oireachtas committee on Culture, Heritage and the Gaeltacht that Ireland has lost half a million waterbirds, almost 40 per cent of the population, in the last 20 years.

Lapwing numbers are down 67 per cent in less than 20 years, while the common mallard has seen populations numbers decline by more than 40 per cent in 20 years.

“Some bird species are more adaptable than others, but for many the rate of loss of their habitats is happening so fast that they cannot cope with the change, and their populations have been decimated,” the organisation will warn.

The country’s stock of farmland and countryside birds is also similarly affected, with about a quarter of familiar farmland birds exhibiting serious declines. The Birdwatch Ireland submission argues that “our once biodiversity-rich farmland has become less and less hospitable for wildlife, as agricultural methods and technologies have intensified”.

Other factors affecting farmland and countryside birds include the industrial-scale extraction of peat bogs, and the afforestation of habitats.

There are some more positive trends among raptors, or birds of prey, with the peregrine falcon, golden eagle, white-tailed eagle and red kite starting to recover.

However, they are affected by many of the same issues as other species, and Birdwatch Ireland is calling for better resourcing of the National Parks and Wildlife Service and greater collaboration with An Garda Síochána to tackle poisoning of the birds.

The trends are similar for urban birds and seabirds, which are facing the loss of habitat due to changing construction practices and climate change, respectively. Changing patterns of prey fish migration, again caused by climate change and warming seas, are also affecting the state’s seabird population.

Recession-era cuts are blamed for accelerating the crisis. “Funding for biodiversity was subject to devastating and disproportional cuts during the recession and have not recovered sufficiently. Now is the time to bolster this funding to ensure that we can continue to avail of the ecosystem services that nature provides,” Birdwatch Ireland will tell the committee. Funding is also needed for additional bird survey coverage “to fill gaps in our knowledge of bird species distributions and abundances”.

There is also a call for the Government to protect biodiversity on the island of Ireland, which is classed as a single biogeographic unit, during Brexit negotiations.