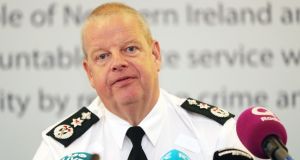 The Police Service of Northern Ireland’s new chief constable has vowed to use community support as a “weapon” to defeat dissident republicans.

On his first day in office, Simon Byrne said he wanted to divert more resources to step up the engagement with communities to help earn their trust and backing.

“I think the long-term answer is about investing wisely and sustainably in community policing,” said the former Cheshire Constabulary chief, who has also served with the Metropolitan Police, Merseyside Police and Greater Manchester Police in a 30-year career.

“At the end of the day we all live somewhere. Those people who are intent on causing evil — there will be a next-door neighbour, there will be family member — they can tip us off if they are planning to attack police officers or somewhere else, where are their weapons kept, where do they meet to share their ideas.”

The 56-year-old formally assumed office after taking part in an attestation ceremony at the Belfast headquarters of the NI Policing Board, the PSNI’s oversight body, on Monday afternoon. He said the PSNI was a “unique service with unique challenges”.

“I am proud to be sat here with the list of things to do ahead of me,” he added.

He would not be drawn on his predecessor George Hamilton’s call for a public debate on an amnesty for Troubles crimes, saying: “I’m not qualified to go there yet”. But he did urge political support for the introduction of stalled legacy mechanisms agreed in the 2014 Stormont House agreement that would see the creation of an independent policing unit to take over legacy investigations.

On the annual summer controversy over whether police should remove banners or flags that are the source of community tensions, he said there was a need to demonstrate “tolerance, patience and discretion” and try to resolve disputes over symbols through common sense and dialogue.

Mr Byrne also addressed a past controversy after he was cleared by a tribunal examining a range of workplace bullying allegations. He stressed he was “exonerated of all the allegations completely”.

Asked if he has a robust management style, the new chief said: “Like many people, it’s different strokes for different folks, really. Sometimes you have to make tough decisions and be prepared to stand by them, sometimes it’s about humility, sometimes it’s about listening and showing empathy with people. So it’s not about one size fits all.”

Mr Byrne said he would advocate greater use of cutting-edge technology in everyday policing. “Most of us these days run our lives on a phone, why can’t the police?” he said.

On Brexit, Mr Byrne said he had been assured that the PSNI was planning effectively for all eventualities, including a hard Brexit.

Policing Board chairwoman Anne Connolly welcomed his appointment, saying: “Today marks another new chapter in the history of the PSNI.

“In leading the service forward Chief Constable Byrne’s experience will bring a new perspective and focus to the delivery of the policing service.

“The chief constable position is challenging, demanding and carries a high profile and we know that there is a lot in the inbox to deal with.

“As a board we are very much looking forward to working with him to tackle the challenges that lie ahead and we wish him well in his new post.” – PA