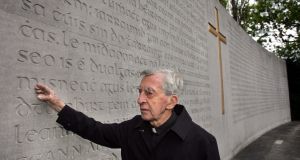 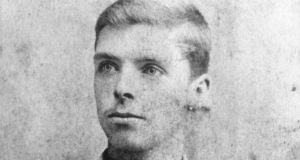 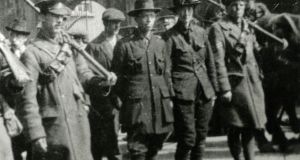 Michael Mallin and Countess Markievicz being escorted away by government troops, Easter rising 1916. Photograph: Courtesy of National Museum of Ireland

In the aftermath of the Easter Rising, the British prime minister Herbert Asquith promised nationalist politicians he would publish the courts-martial proceedings.

He never did. The documents were deemed to be so sensitive that they were not made publicly available until 1999. In the case of Michael Mallin, the Irish Citizen Army commandant of the St Stephen’s Green garrison, the official account contains a sentence which his descendents believe is a fabrication.

In his defence at his court martial, Mallin is reported to have said: “I had no commission whatever in the Citizen Army . . . I was never taken into the confidence of James Connolly. the Countess of Markievicz ordered me to take command of the men as I had been so long associated with them”.

This would indicate that Mallin was trying to save his own skin and implicate Markievicz as his senior commander, hence putting her literally and figuratively in the firing line.

The suggestion that he would act in such a way is “profoundly wrong”, says his son, Fr Joe Mallin SJ, who believes the official account is motivated by malice and designed to smear his father’s reputation.

Now 103 and living in Hong Kong as a Jesuit priest since 1948, Fr Mallin has decided in his final years to try to vindicate his father’s reputation.

To the Memory of my Father is an 18-page document which begins with an explanation that he was not in full possession of all the facts surrounding his father’s execution until now.

It’s an impressive document. Coming from a man who is 103, it is remarkable.

The initial impetus to vindicate Michael Mallin came from the wider family. Some 180 of them from across the world turned up last year for a family gathering to mark the centenary of his execution.

The proceedings were written down by Brigadier General Ernest Maconchy, the president of the court martial who was hardly an objective party.

When historians themselves accepted his account, the family decided to act.

Mr Tapley said he became convinced the transcript was a fabrication by the presence of two words purportedly from Mallin who is alleged to have said he would “indignantly repudiate” the notion that he was aiding Germany. Such an ornate phrase would not be used by someone who left school at 12, Mr Tapley suggests.

'To the Memory of My Father'

One of the witnesses called at the trial was Captain Harry de Courcy-Wheeler who took the surrender of the St Stephen’s Green garrison.

In his testimony, De Courcy-Wheeler said Mallin told him he was the commandant of the garrison.

Why then, Fr Mallin maintains, would his father admit to being commandant of the garrison and then deny it at his court martial?

A second plank of their evidence surrounds the stated desire by General John Maxwell to execute Markievicz.

Fr Mallin believes Maconchy altered the court record to suggest that Markievicz was in charge. By doing so he hoped to provide further evidence to bolster Maxwell’s case with the British cabinet that she should be executed.

Thirdly, Fr Mallin contends that Maconchy was intent on smearing his father because Michael Mallin had been a British soldier for 13 years.

Indeed, Fr Mallin believes his father and Maconchy may have known each other from the 1897-1898 Tirah campaign on the Indian/Afghanistan border.

Fr Mallin writes: “It is reasonable to believe that Maconchy would have regarded him as a treasonous former soldier, a disgrace to the British uniform and shooting alone would not be good enough.”

Fr Mallin said he was told by his mother that the British had offered Michael Mallin a commission at the start of the first World World to re-enlist and act as a recruiting officer, but he refused.

Mr Tapley began the process of compiling the evidence for Fr Mallin in November 2015 and finished it a year later.

He corresponded with Fr Mallin the old-fashioned way. The pair exchanged 20 letters over the year.

Despite his great age, Fr Mallin’s mental facilties remain as sharp as ever. “He has put me through my paces,” said Mr Tapley. “ Some of the questions were Jesuit-type questions. ‘Had my father not an obligation to save himself for his family?’ He asked me to answer that question. I’m only a mere mortal.”

Fr Mallin would query everything. Where is the evidence for this? What is the source for that?

Finally they settled on a document that Fr Mallin could agree on in November 2016, but still he had questions.

All the time, the family were conscious it might be a race against time. “He’s a miracle of nature,” said another relative, Donal Donnelly, of Fr Mallin’s good health given his extreme old age.

Nevertheless, in January the priest took a turn and spent 10 days in hospital. The family feared he might not survive or would be so weakened as not to be able to give final approval to the document.

“My fear was that he would die before we got the document completed,” Mr Tapley recalled.

Ever resilient, Fr Mallin pulled through and continued his prolific letter writing. The document was finally launched last week in Kilmainham Gaol where Michael Mallin was executed along with the other leaders of the Easter Rising 101 years ago.

In his last letter to his family, Michael Mallin told his wife that all was lost except “honour and courage”.

Fr Mallin said his father was an honourable man to the last and his alleged actions at the court martial would be “contrary to everything he believed in and lived by”.

He has challenged historians to correct the “fundamental mistake” of taking the account of the court-martial proceedings as the truth.

He concluded: “Failure to explain to readers or an audience that the court-martial record is Brigadier Maconchy’s personal handwritten account is an error of enormous proportions and an injustice to my father’s honour.”