Commission calls for human rights to be safeguarded during pandemic 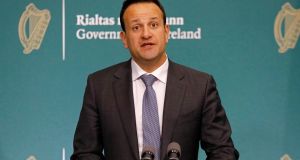 The Irish Human Rights and Equality Commission has called on parties involved in government formation to safeguard human rights and equality measures amid the emergency responses to the Covid-19 pandemic.

In a letter sent to party leaders last week, it also outlined a series of reforms it believes should be prioritised by the next government.

In the letter, acting chief commissioner Tony Geoghegan wrote that “while the crisis currently facing our country is stark and unprecedented, it is important that Ireland’s legal human rights and equality norms continue to be understood, protected and indeed reasserted as soon as possible”.

The commission has also made a series of requests for measures to be included in a programme for government. Fine Gael and Fianna Fáil negotiations over the framework for the next government are expected to intensify this week.

“Recent emergency legislation to secure continued housing tenure and support incomes, and action to secure universal healthcare, underscores the need to provide a basic floor of rights which will support both individual dignity, and the resilience of our society,” Mr Geoghegan wrote.

He asked that the next government “take action to permanently strengthen socio-economic and cultural rights, including, subject to referendum, by amendment to the constituting”.

The reference to referendums will be seen as another endorsement of the campaign to insert a right to a home into the constitution. The watchdog has previously stated that the right should be enshrined in the Constitution.

The commission is also seeking legislative reforms, including reform of the employment equality acts, modernisation of hate crime laws and legislation targeting local authorities which fulfil their obligations on traveller accommodation.

The human rights watchdog also wants an incoming government to implement new rules that will require government departments and public bodies to assess the human rights and equality implications of their work, and reform Ireland’s laws which cover applications for international protection.

It reiterated its long-standing call to phase out direct provision, adding that “in the interim, actions should be taken to improve living conditions, halt the use of emergency accommodation, and regulate and inspect such centres”.

Last month, the commission wrote to Taoiseach Leo Varadkar warning that the exceptional measures “have the potential to curtail fundamental rights and freedoms” and asked that “such restrictions be necessary, proportionate and that human rights and equality principles inform their implementation”.

The watchdog body has also offered to provide advice and guidance to the government around the human rights implications of emergency Covid-19 measures.