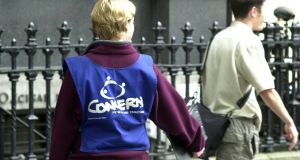 More than a dozen employees have been fired from several Irish overseas aid charities over incidents of sexual misconduct in recent years.

Concern has carried out internal investigations into claims of sexual misconduct made against more than a dozen staff members in the last 10 years, with the allegations upheld and the individuals dismissed in three-quarters of the cases.

Goal has dealt with at least seven cases of sexual misconduct allegations made against staff members since 2010. It is understood about five staff members, who were all working overseas, were dismissed following internal investigations.

“All complaints were immediately investigated thoroughly and, where evidence was confirmed, disciplinary action, up to and including dismissal, was taken,” a spokesman for the charity said.

Trócaire fired one member of staff working in one of their overseas offices in Africa for sexual misconduct in 2016.

It is understood the staff member was not a programme aid worker, but an ancillary employee. The individual was not an Irish national, and was hired from the country in which the office was based.

The humanitarian charity was informed of the allegations against the male staff member by local police. A spokesman for Trócaire said the individual was suspended “immediately” after the allegations were brought to the charity’s attention. The aid office was run jointly by Trócaire and its UK counterpart the Catholic Agency for Overseas Development.

“We conducted an investigation of the incident, established that the individual had contravened our code of behaviour and he was dismissed. We are also fully co-operating with the police investigation,” the spokesman said.

Trócaire also disclosed it was recently made aware of a separate breach of safeguarding policy by an individual working in an overseas organisation that received funding from the Irish charity.

Trócaire was involved in investigating the incident, and the “individual was dismissed,” a spokesman said.

Concern chief executive Dominic MacSorley said the current spotlight on incidents of sexual misconduct by overseas aid workers was a “critical opportunity” for the sector to raise standards across the board.

“All organisations need to guarantee that programmes are implemented in a manner that ensures both the populations we seek to help and our staff are treated with dignity and respect,” he said.

Concern, Trócaire and Goal all have an extensive network of humanitarian programme offices overseas in developing countries, and all receive significant funding from the State.

Over the last five years Trócaire has received €98 million in funding from Irish Aid, the State overseas development programme. The charity also received funding from the British government, which amounted to €19 million over the last three years.

The revelations of sexual misconduct among staff working with Irish humanitarian charities comes as British charity Oxfam have been embroiled in a major sex scandal, involving the hiring of prostitutes by aid workers in Haiti following the 2010 earthquake. The controversy led to the resignation of Oxfam deputy chief executive Penny Lawrence earlier this week.

In 2004 Oxfam Ireland was made aware of an allegation of “gross misconduct” of a staff member who was working overseas for the charity, a spokeswoman said. As part of an internal probe evidence of sexual misconduct prior to the individual’s employment with the charity emerged, and the staff member was dismissed.

In recent years the Irish charity has dealt with two cases where staff members have been accused of sexual misconduct. In both cases the individuals were working in Ireland and neither allegation was upheld following an investigation.