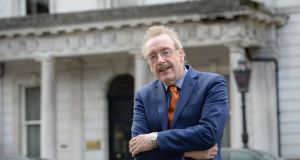 Ray Bassett, a former Irish envoy to Canada, says there is room for an Irish Eurosceptic party because those concerned about the EU are not represented by the mainstream parties. Photograph: Dara Mac Dónaill

Is the time right for an anti-European Union party to enter the Irish political landscape?

Time will tell but the decision to launch “Irexit Freedom” comes against a backdrop of opinion polls repeatedly showing the Irish public to be among the least Eurosceptic people in Europe.

The latest Eurobarometer poll found that nearly two-thirds of Irish people (64 per cent) had a positive image of the EU, while 84 per cent were optimistic about its future.

Brexit, it appears, has consolidated rather than undermined Ireland’s support for the European project. Support has risen by five percentage points since last year’s Eurobarometer survey a year ago.

As the debacle that the UK’s EU departure plays out, it might not seem to be a good time to start an Irish Eurosceptic party.

However, approximately 250 people have signed up to attend the launch of “Irexit – Freedom to Prosper” at the Bonnington Hotel in Dublin 9 on Saturday. Each person who turns up will have to pay €8 towards the new party.

Its founder, Hermann Kelly, is the director of communications for the Europe of Freedom and Direct Democracy group in the European Parliament – a coalition of Eurosceptic parties including Ukip and the Italian Five Star movement.

He concedes that striving for an Irish exit from the European Union is a minority pursuit at present.

“As [Charles] De Gaulle said, ‘all long-term projects are long-term’,” he says.

“We are planting a seed. The EU and many of the Europhile parties will be throwing dung at us at every opportunity. When you plant a seed and you throw dung, hopefully it is going to grow into something.”

Irexit Freedom to Prosper arose out of a public meeting in the RDS in February, which was attended by some 600 people and addressed by former Ukip leader and Brexiteer Nigel Farage.

Saturday’s meeting will be addressed by former Irish ambassador Ray Bassett, UCD economics professor Ray Kinsella and Paddy Manning, who came to prominence as a gay man who opposed the 2015 same-sex marriage referendum.

Kelly says Manning is a “contrarian” who will address the groupthink, as he sees it, in the Irish media. Freedom of expression will be a core value of the party, he adds.

Bassett, a former envoy to Canada, says there is room for an Irish Eurosceptic party because those concerned about the EU are not represented by the mainstream parties.

He said he would not be involved in the party but there was “room” for it as those that previously leaned that way, such as the Labour Party and Sinn Féin, had become more favourable towards the European Union in recent years.

The retired diplomat said that the ability of the party to win seats in next year’s European elections would depend on how Brexit plays out.

“If those who predicted that we are on the wrong road are right – clearly there would be a much bigger appetite. If what the Taoiseach and Tánaiste are saying is right, I think it is less likely that there will be a positive surge in that direction.”

Kelly admits he has taken some flak for the absence of women speakers from Saturday’s event, but says he could not find suitable options in time.

He had intended asking journalist Gemma O’Doherty because of her stance on corruption in Ireland, but decided against it when she announced she was standing for the presidency.

As it stands the party consists of himself, but he is hoping that a former adviser to the late former Fianna Fáil minister Brian Lenihan, who he declined to name, will become its first chairman.

“I asked him because of his experience of being involved in a political party,” Kelly said. “This thing tomorrow is about registering the party, agreeing on a party platform and then asking others to get involved.”